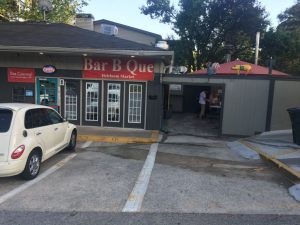 Heirloom is one of Atlanta’s most beloved BBQ restaurants and is particularly popular as a lunch spot for office workers in the Cobb Galleria. Photo: Graham Hurley

Atlanta has three quick takeout Mexican restaurants that dominate Buckhead: Willy’s, Chipotle and Moe’s. However, there may be another alternative for those looking for something different. Bell Street Burritos is a fantastic, cheaper option to the big three. Bell Street is renowned for their fantastic burritos, especially their shrimp burrito. Burritos are filled with pinto beans, rice, a meat of your choice and pico de gallo, but one can add other ingredients like green chiles, grilled onions, etc. Although mainly famous for their burritos, Bell Street is not just a burrito joint. Bell Street is also known for their quesadillas with pico de gallo. Bell Street Burritos has daily specials and on Friday they serve tamales, which are a corn-based pastry that is filled with meats, cheeses and vegetables steamed in a corn husk. Bell Street Burritos has three locations in Atlanta: on Peachtree St. in Brookwood Hills, downtown at the Sweet Auburn Curb Market and in Inman Park.

Regarded as perhaps the best BBQ restaurant in the state, you won’t get much better than Heirloom Market in Atlanta. Located near Cumberland Mall on Akers Mill Road, Heirloom is a restaurant that is hidden right next to a corner store; however, it is a hit with the crowd of workers at the Cobb Galleria. Heirloom is a Korean inspired BBQ restaurant that serves traditional American BBQ items like ribs and pulled pork, as well as an assortment of mouth watering sides like mac n cheese and kimchi coleslaw. The two chefs, Cody Jones and Jiyeon Lee, have created a fantastic fusion of classic American BBQ and Korean BBQ.  Their pulled pork sandwiches, ribs and brisket are to die for. But, one of the best items on their menu is definitely the smoked wings. Topped with sesame seeds and a delicious sauce, they are the perfect lunch treat. Heirloom is famous for their different daily sides, which vary based on the day and how the chefs feel. There is no better restaurant to quench a BBQ craving than Heirloom.

Atlanta is known to have pretty good sushi, but other types of Japanese food tend to be forgotten. Luckily, Atlanta is home to a famous Los Angeles ramen chain called Jinya. Jinya serves an excellent bowl of ramen for anyone who is looking for a delicious and filling meal. Jinya is famous for having a wide variety of different types of ramen. There are spicy ramen variations for those looking for a bit of heat, like the spicy chicken ramen and the tonkotsu spicy ramen. If you are looking for a more classic bowl of ramen, then you can order the “sprouting up'”ramen, which comes with delicious pork chashu, spicy bean sprouts, crispy brussel sprouts and much more. What makes Jinya stand out, however, is its fantastic broth. As you eat the ramen, make sure you taste the broth because it is astonishingly good. Jinya has three locations in Atlanta, including Roswell Rd. in Buckhead, Roswell Rd. in Sandy Springs and S. Broad St. in Alpharetta.

Pizza is a favorite among tons of people, and Atlanta is famous for places like Varasano’s and Fellini’s. Antico, however, strays from the traditional American pizzeria by serving authentic, thin crust Italian pizza. They serve an excellent Margherita pizza as well as a fantastic Italian sausage pizza with peppers. Antico does not have any gluten free options, so the restaurant will not work well with that crowd. One of Antico’s most popular locations is actually inside of the Mercedes-Benz Stadium. Other locations are on the Westside near Georgia Tech and in Battery Park. Antico is a perfect alternative to your traditional Atlanta pizza restaurants.