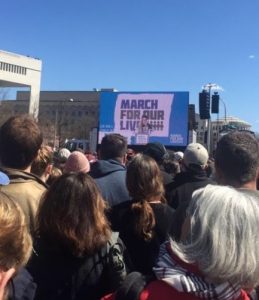 Students across the country flew to DC to participate in the March For Our Lives which had a whopping 800,000 people protesting. Photo: Joanna Hurley

The recent Stoneman Douglas shooting, where 14 high schoolers and three staff members died, has brought students into the thick of the conversation, and now these students are at the forefront of the movement to enact gun reform.  Emma Gonzalez, a student at Stoneman Douglas, made national headlines with her incredibly powerful and emotional speech at the March for Our Lives in Washington, D.C., organized by the Parkland, Florida students. The nationwide March for Our Lives and other protests have gained international attention, and more and more people are rising up and speaking out against the lax gun regulations in our country.

Currently, people are optimistic that this time around some action will actually be taken, but Congress is unable to come to agreement and even determine what the problem actually is. Republicans have only addressed the issue of school security with the STOP School Violence Act, which allows schools to request and receive $50 million grants administered by the Department of Justice for school safety. In addition, a $25 million grant will be granted for physical improvements to schools.

Sure this helps, because it gives schools more money, but local governments and school systems have already been providing training and additional security measures. In the big picture, these reforms are nothing but a baby step towards addressing the issue of dangerous firearms in the hands of murderers.

Going forward, the majority of U.S. citizens agree that more strict universal background checks should be implemented for all current and future gun users. President Trump has directed the Department of Justice to outlaw bump stocks, which allow semi-automatic rifles to be fired at a similar rate of fully-automatic rifles. This restriction was fueled by the Las Vegas tragedy last year, but the Bureau of Alcohol, Tobacco, Firearms and Explosives said that these firearms are not subject to regulation since they are technically not fully-automatic. The government is also in an intense battle against gun manufacturers regarding this issue.

It seems that the federal government and Congress will continue to run into walls and that reform is unlikely for 2018. If anything does occur on the issue of bump stocks, it will not be this year. State legislatures are beginning to adjourn for the year and chances of meaningful gun reform at the state level appear dim.

But all hope is not lost. Midterm elections for every seat in the House and 34 seats in the Senate are up for grabs in November. If the Republican party maintains a majority, then it is more likely that we will not see reform. But a Democratic majority would certainly raise the chances of possible gun reform in 2019.