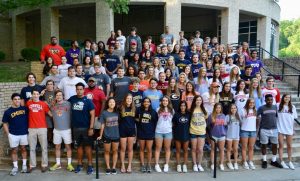 The Class of 2018 smiles while sporting their college gear. Photo: Lee Wilson

After four years of academic strain, athletic competition and extra-curricular madness, the seniors are ready to move on. Whether the students only attended for four years of high school, 13 years of pre-first through 12th grade, or somewhere in between, Pace has had a profound impact on the lives of everyone graduating tomorrow.

“Being a ‘lifer’ is cool to me because Pace has been all I’ve had and all I’ve known,” said senior Joseph Mathias. Mathias’ friend Ben Bernstein has a different perspective having come to Pace in ninth grade. “Though I have not been here as long as [Mathias], Pace still had the ability to give me a great education and the courage to strive for excellence.”

The graduating class is sending students to all corners of the country and even internationally. Richard Ellis and Spencer Sinclair will attend schools in Scotland (at University of St. Andrews and University of Edinburgh, respectively), Ryan Mazur and Anna Stone will go to The University of Chicago and Daniel Blumen will attend the University of California, Los Angeles. Khaki Loughran and Harrison Lewis were both awarded the Morehead-Cain scholarship from UNC. This was the first time in history that two people from the same school were selected. The class boasts two soon-to-be Princeton students: Jeb Carter and Ben Thompson. The excellent resources and teachers at Pace along with the superb talent of the students creates an enticing pool that excites college admissions officers.

“Beyond all else, I will miss the faculty at Pace,” said Carter. “Pace teachers have done so much to make my education extraordinary, and I will definitely be back to visit. Pace has helped me to figure out what I love to learn and has given me the tools necessary to follow my curiosity and intuition.”

The Class of 2018 includes several nationally renowned student athletes like Jamaree Salyer and Isaiah Kelly who will continue playing their sport at the University of Georgia and Yale University, respectively. For many seniors, being a student athlete forces keener time management. “I get home at 10 p.m. every night and I only have so much time for homework, but learning skills on the field, like being a team player, and being able to utilize those skills in school and vice versa is immensely valuable,” said Bernstein who is committed to pitch at Oberlin College in the fall.

The seniors took full advantage of the clubs that Pace has to offer and also the lively social scene. “I really like the group of friends that were stuck with me through four years of high school,” said Sinclair, who is a regular contributor to the Knight Gallery.

The Class of 2018 made profound contributions to the arts. Molly Richardson won a Scholastic Art gold key and two silver keys for photography, and Cole McCorkle was an avid thespian and an Arts Laureate twice. Prior Arts Laureate Ibum Obu contributed as a powerful dancer, actor, National Anthem singer and the best shot-putter in Pace history. “Pace arts is really special,” said Obu. “I enjoyed dancing on stage and during Spirit Week, as well as singing solo and with the chorus.”

Senior Dean Allison Riley will part ways with this bunch after spending four quality years with them. “The Class of 2018 gave themselves the perfect moniker: ‘Good Vibes,'” she said. “They are not attention seeking, but rather a chill group of good people who are a positive presence at school each day. They lend their good nature to the classroom, the athletic field and the community. They are kind to one another and have demonstrated the same leadership by encouraging the community to bring their best to school.”