LeBron on Verge of Winning His Third Ring 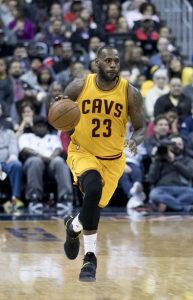 The National Basketball Association has wrapped up the first and second round of the playoffs. So far, the postseason has been filled with surprises, including three upsets. The beginning rounds highlighted the star players along with many lesser known athletes who demonstrated their skills and led their teams to multiple victories.

The playoffs have been filled with major dunks, game winning shots and a couple of buzzer beaters by the greatest player, LeBron “The King” James. The two teams that seem to have displayed their skills to their best advantage and appear to see a clear pathway to the NBA Championship are the Cleveland Cavaliers led by LeBron and James Harden’s Houston Rockets.

In the Western Conference, it’s been clear since halfway through the regular season that there are only two possible contenders: the Golden State Warriors and the Houston Rockets. In round one, the two-seeded Warriors faced the seven-seeded San Antonio Spurs. The Warriors had to compete without one of their former Most Valuable Players, Stephen Curry, who has struggled with a series of ankle injuries.

However, the Spurs also faced injury issues with former Defensive Player of the Year Kawhi Leonard, who hadn’t played more than 10 games this season. Dub Nation, as Golden State is often referred to, easily made their way past the Spurs despite the expert coaching of Gregg Popovich for the Spurs.

Golden State faced the New Orleans Pelicans in the second round and went into the matchup knowing they would have to play their best basketball to overcome the monster of NOLA, Anthony Davis. But they took care of business and again return to the conference finals, this time against the fiery Houston Rockets.

The Rockets had maintained the first place seed in the Western Conference for most of the regular season with 65 wins and only 17 losses. They acquired Chris Paul, a future Hall of Fame point guard, to work alongside mastermind James Harden. Harden has been making his case for this year’s MVP trophy while helping his team outlast the Minnesota Timberwolves, also within five quick games in the first round.

Next the Rockets were challenged by the aggressive Rookie of the Year candidate, Donovan Mitchell of the Utah Jazz. Houston played superb basketball in this series and ended the Jazz’s season in the second round, winning that series four games to one. They now come face to face with the team everyone is against, the Warriors, in the conference finals. Dub Nation has won two out of the last three NBA championships.

However, this year Houston seems to have the edge over Golden State. Although they split the season series in the regular season, the Rockets have maintained their best record in franchise history behind the crafty play of Harden. Harden led all players in scoring this year, averaging a staggering 30.4 points per game while also dishing out the ball about nine times per game. Houston has been on a roll, only losing five games since March 5 and are poised to arrive in the finals for the first time since 1995.

In the East, many people have doubted LeBron after witnessing his team’s first round versus the Indiana Pacers. But they seem to have found their mojo again after James’ game seven performance. LeBron has been to the past seven straight finals, the longest streak in NBA history, and has prevailed in three of those seven.

He was challenged with a team in the first round that nobody believed could make it this far, the Indiana Pacers. The Cavs fought hard in a seven game series but it appeared that the Pacers were playing better basketball until the final game. LeBron took over in an epic game seven, helping his team advance to the second round. He went on a rampage, scoring 45 points in 43 minutes and throwing out seven assists and collecting eight rebounds.

Cleveland then traveled north to face the surprising number one seed, the Toronto Raptors. Although the Raptors have had a record-breaking season, they were no challenge for LeBron. He easily took care of business at home and away sweeping the Raptors in four blowout games. Now for the eighth straight time, LeBron will compete in the Eastern Conference Championship. The only other team that has a slight chance to beat The King to the championship is the Boston Celtics who will face the Cavs in the next round.

Boston has faced many injuries this season, including LeBron’s former teammate, Kyrie Irving, having surgery a month ago, hindering him from participating in the playoffs this year. The Celtics also acquired the star guard from Utah, Gordon Hayward. However, he also dealt with a season-ending injury in his first game as a Celtic. Cleveland outlasted Boston two games to one in the regular season and has been on a terror in the second round. LeBron’s playoff experience should outdo the upbeat play of the Celtics, allowing him easy access to his eighth straight championship run.

Now if the Rockets and Cavs make their way to the 2018 championship, the question remains, who will be crowned champion? James Harden has only watched the finals as a fan from home, never having played in such a high profile event. LeBron, however, has won three championships, with the Miami Heat and with the Cavs, including the defeat of  the Golden State Warriors two years ago despite the Warriors record-tying 72-win season.

The Rockets beat Cleveland in both their matchups this season by an average of 18 points. Although the Cavs struggled in the first round of the postseason, LeBron changed his mindset in the second round against Toronto and is averaging numbers that don’t seem possible this postseason. He is putting up nearly 35 points per game, 10 rebounds and about nine assists, closing in on a triple double.

Harden, on the other hand, is nearing 30 points per game, along with five rebounds and eight assists. The Rockets have gracefully walked their way into the Western Conference Championship, but beating Golden State the next round will take all their energy and determination. Although that task seems plausible this year, many wonder how they will be ready to face The King so soon.

For Cleveland, however, defeating the Raptors was simple, and facing Boston in the next round seems like a fairly easy task for LeBron. Though Houston may have the all-around better team, LeBron is too powerful for the Rockets to prevail.