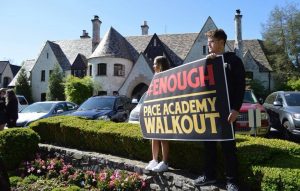 Seniors Molly Richardson and Chris McCaffery hold a #Enough banner during the speeches. The whole walk out was a student-driven effort. Photo: Samantha Delman

On April 20, Pace students and faculty walked out of class for approximately 25 minutes to commemorate National Walkout Day. The date marked the 19th anniversary of the Columbine shooting in Colorado, one of the first school shootings in the nation. In commemoration, students wore black and released thirteen white biodegradable balloons for the thirteen victims of Columbine. Student speakers addressed the audience and spoke about the need for sensible gun legislation to protect the safety of all citizens.

Three freshmen from Zeena Lattouf’s Research and Technology class presented their semester project on gun violence. Their document was modeled after the Atlanta Student Movement’s document written in 1060 during the Civil Rights Movement entitled “An Appeal for Human Rights.” Matt Genser, Maggie Jenkins and Abby Sroka addressed mental health concerns and the need for meaningful gun regulation, urging walkout supporters to coexist with citizens who are apprehensive about the movement.

The walkout leadership board included students from the sophomore, junior and senior classes. Each student was given a task to fulfill such as contacting local media (like the Northside Neighbor) or creating templates for letter writing. On the day of the walkout, the students set up speakers and a podium in front of the Castle and directed students to gather on the front lawn so that drivers on West Paces Ferry could witness the event.

Seniors Sam Delman, Sloan Wyatt and Jordan Shoulberg all spoke on behalf of the walkout leadership board. The sophomores managed the letter writing table, where supporters had the option to write their congressional representatives or Parkland students.

Since Pace was on spring break during the first national walkout on March 14, students chose April 20 as an appropriate date to stage the event (in accordance with the second National Walkout Day). Students hope to continue this effort in the coming years, noting that the walkout is only the first step toward raising awareness and impacting change.