“The Laramie Project” Opens This Friday at Pace 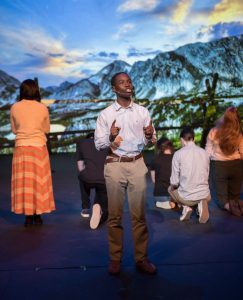 Performances are this Friday and Saturday, April 27-28 at 7 p.m. in the Pace Fine Arts Center. Photo: Laura Inman

Following the incredible performances of “The Brute” and “Joseph and the Amazing Technicolor Dreamcoat,” Pace upper school actors are working hard on the final production of the season. For the past few weeks, the cast has spent hours each day rehearsing for their upcoming performance of “The Laramie Project.”

Originally created by Moises Kaufman and the Tectonic Theater Company in 1998, “The Laramie Project” involves the murder of a gay college student, Matthew Shepard, and its aftermath. The play highlights the lives of residents of Laramie, Wyoming and the town’s efforts to deal with the hate crime.

The Pace cast will bring to life this true story while taking on the challenge of performing an intense plot line. Upper School Visual and Performing Arts teacher Sean Bryan believed it was time for his acting students to gain the experience of performing in a more recent show based on real events. “I like to give them a variety of material for them to act in so they can get their feet wet in multiple styles,” said Mr. Bryan. “This play is a drama that takes place in 1998, so they’re playing characters that are pretty close to naturalism and average individuals.”

The drastic change from performing light, satirical plays to performing a deep, powerful show has greatly influenced the cast in their everyday lives. “This show is really heavy, and working every day after school on something that can be so sad has made me reflect on my life and how I can spread love and not hate,” said junior Emily Schmitt. “It’s been a severe shift to a serious topic but this is such an important message and I’m glad we’re tackling it head on.”

Others think differently of the shift, preferring to perform more uplifting musicals. “It’s a true story so I don’t find myself enjoying it as much because I’m remaining true to the message, whereas a musical is about the jokes and music,” said junior Raina Williams.

The cast’s approach to the story consisted of having several important discussions where they concentrated on the crime and what that meant for the people of Laramie. “I think we’ve handled it in a healthy way,” said Mr. Bryan. “We recognize the importance of the message of the show, which is to eradicate hate, and by approaching it that way, we’re not reflecting on the pain Matthew Shepard went through. We’re looking at the strength that the community can build from.”

The cast has focused on keeping an uplifting attitude in order to retain their enthusiasm for performing. “We try to joke around a lot because the topic is so serious, so we check in with each other and make each other laugh, so we can keep our energy up,” said Schmitt.

For this particular production, the actors will take on the challenge of playing a variety of different characters, rather than just one. This tests the cast’s ability to shift between roles, and they have enjoyed this opportunity to be more involved in the show than they had been before. “I like the fact that we all can play multiple characters,” said Williams. “It’s challenging to know different personality types and character traits.”

Mr. Bryan praises his actors for their work thus far in learning to play different roles and believes it has enhanced their acting as a result. “They’re pushing themselves to new levels,” he said. “I’ve really enjoyed watching the versatility of the actors.”

Through dealing with such a serious plot together, the cast has enjoyed the bonds and friendships they have fostered. “I’ve really loved working with a group of people that I don’t see all the time or haven’t worked with before,” said Schmitt. “A lot of people do the musical, but since the spring shows are so much smaller, you can really get to know everyone in the cast well,” said Schmitt.

“The Laramie Project” also features three teachers in the cast: English teacher Bailey Player, science teacher Julie Hall and Director of Athletics Troy Baker. “I want it to reflect our community,” said Mr. Bryan. “If there were just students involved in the show, we’re ignoring a major part of the Pace community, which would be faculty.”

Although the rehearsal process has run fairly smoothly the past few weeks, the cast encountered a substantial setback with the flooding of the Fine Arts Center. While repairs were made to the FAC, the cast had to rehearse in various other locations, altering their spacing when attempting to block the scenes.

“The stage being out of commission for like, three weeks was a major setback for us,” said Schmitt. “We were confined to the drama room [Room 100], which is so much smaller than the stage and was a real challenge to work in. We were all really happy to get back on stage.” The actors and actresses had to make adjustments quickly, as the show is this weekend. “It’s a very big production that needs a lot of space, so we have had to adapt to the new space fast,” said junior Ania Briscoe.

Performances are this Friday, April 27 and Saturday, April 28, at 7 p.m. in the FAC. The production is rated PG-13 for adult language, hate speech and frank talk of violence. Tickets are $5 for students and $10 for adults and can be purchased at the FAC box office prior to the performances or online at:   https://pace.booktix.com/view/4/cc84edf42fe7cd22/