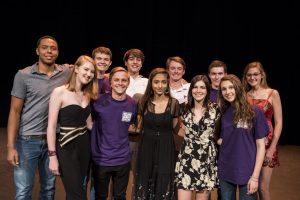 Pace upper school arts laureates smile after performing at the ceremony on April 20 in the FAC. Photo: Omar López Thismón

On April 20, a group of 12 upper school students had the opportunity to share their talents with their peers and the faculty. The Arts Laureate ceremony annually recognizes students who are nominated by their classmates as standouts in the visual and performing arts.

Holton, who has performed lead roles in a number of school musicals, wowed the audience as she sang “Astonishing” from the musical “The Little Women.” “I’ve been passionate about singing and acting for as long as I can remember,” said Holton. “I was really excited when I heard I got nominated for arts laureate, because I knew it was a big honor.” She not only enjoyed singing in her first ceremony, but also getting to see the talent of the other laureates.

Ray enjoyed the opportunity to display her artwork because she was able to share a talent she felt not many people knew about beforehand. “While I love to act and sing and dance, those are live and fleeting works of art, but my visual art is forever and is a lasting display of my passion,” said Ray. Additionally, her art is very personal to her. “It fluctuates with whatever is going on in my life,” she said. “So [right] now I’m more interested in making things that are organic and disturbing but beautiful.”

Ferguson has been an avid photographer for a few years, though the ceremony was his first time sharing it with so many of his friends and classmates. He presented a slideshow of many of his photos from his travels, including close-ups of wild animals taken in Africa. “I really enjoy photography because it gives me a chance to capture a moment exactly as it was and look back on it and remember that day,” said Ferguson. “I was a little nervous [about presenting] but hearing some of the reactions to the Africa pictures was really cool. It’s always awesome to see other people appreciate your art.”

After searching for the perfect song, McCorkle received a huge ovation for his rendition of AJR’s “Turning Out,” which he believes was his “perfect song.” “It’s a somewhat popular pop song, right in my range, and has accompaniment that can be played on piano,” he said. “All this planning led up to the best performance I’ve ever had. The energy in the audience was palpable and it allowed me to really enjoy myself up there and sing one last time to the people that mean the most to me.”