Russians Hack into Snapchat; Return It to Original Version 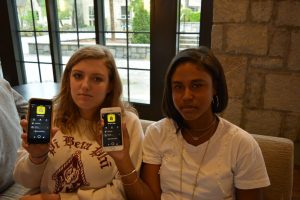 Before the hack occurred, seniors Kate Snyder (left) and Morgan Paige were angered upon opening their Snapchat to see the updated version. Photo: Amy Butler

In early February, many Snapchat users were distressed by a change in the layout of the app. Some people updated the app just as part of their routine, only to regret it once the new version downloaded. These people proved to be the guinea pigs of the new model: everyone else with the old Snapchat tried to do everything they could in order to keep theirs the way it was. “I am furious,” said avid Snapchatter Morgan Mccullough. “I tried to delete the app and change my password 20 times to avoid the change but I was unsuccessful.”

Snapchat was able to switch the interfaces for almost every user, including those of Snapchatters who had turned off automatic updates. This proved to be a downfall for Snapchat, as many angry consumers started petitions to revert back to the original version while others went so far as to delete the app altogether. Nevertheless, Snapchat did not succumb to the pleadings of its followers and sent out a press release saying that it was impossible to return to the previous layout.

However, on April 2, Russian hackers infiltrated the Snapchat software and reverted the encryption codes so that the old Snapchat would come back. Users awakened on this memorable day with cheers as their Snapchat stories and individual snaps returned to their respective areas.

Snapchat’s team, however, was was aghast at the capabilities of the Russians to hack into the system. “I may have to send a Snapchat to [Vladimir] Putin to let him know how upset I am,” said Snapchat CEO Evan Spiegel. “Our team worked incredibly hard for months on the new version, and the Russians just destroyed all of that.” Snapchat is currently trying to determine the root of the hack and ways to prevent something like this from happening in the future. Spiegel believes that there was a bug implanted in the system in mid-February, giving the Russians plenty of time to plan their hack so that it could be executed perfectly. The Russians’ version of Snapchat is identical to the old version.

Despite their advanced problem-solving skills, Snapchat is unsure whether they will be able to change their app back. “We always plan for these types of situations,” said Spiegel. “But even when they are planned for, it is such a shock when something actually occurs.” For now, they are working on designing a more advanced security system with additional firewalls and more complex passwords.