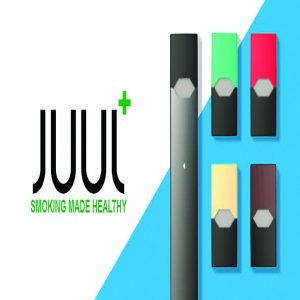 Juuls were recently deemed healthy for your body and lungs. Photo: Her Campus

Two taps to the side of the stick and the small light shines green, yellow or red. Your JUUL electronic cigarette is ready for action. The JUUL wave has swept the nation and has also reached parts of China. JUUL e-cigarettes are increasingly popular with teenagers and college-aged students. The product requires nicotine-filled pods that come in a variety of flavors including Cool Mint, Virginia Tobacco, Cool Cucumber and Mango. Each of these pods contains 5% nicotine.

JUULs are seemingly everywhere. Given the portability, quick charging capacity and array of flavors, the popularity of the JUUL has been immense. Business Insider reported that over the past year, JUUL Labs generated $224 million and sales increased by 621%.

Various gas stations and vape shops sell the JUUL starter pack and pods, including the Shell and Chevron gas stations on West Paces Ferry. The close proximity of these JUUL retailers to high schools in the area is a concern to administrators because the product is so accessible. But don’t be fooled – the revenue of the nearby gas stations is not restricted to local customers. “We have young people coming in to buy pods from all over the U.S.,”  said Shell manager Joe. “Some frequent customers hail from the states of Florida, Tennessee, Arkansas and South Carolina.”

The electronic cigarette industry originally targeted smokers looking for a healthier alternative to cigarettes, but now virtually all of its targeted market is people who were not previously cigarette smokers. Recent studies from Johns Hopkins University have found that the JUUL is actually healthy for you. The studies reported that smoking a JUUL aids your health by improving lung capacity, lowering cholesterol and speeding up metabolism.

“I think the lung capacity aspect could help me in my close tennis matches.” Former Knightly News Co-Editor-in-Chief Alexis Wilkins ‘17 expressed her view. “Now that it is proven that the JUUL is healthy, I think I just might have to buy one,” said Alexis. “I’ll probably get a pink one.”

Additional studies conducted by Sir John B. Gurdon validated the findings of Johns Hopkins University. Gurdon found that the JUUL has various positive side effects: sharpened memory, increased motor skills and an improved immune system. At a more local level, former Pace middle school science teacher Larry Ivens did some research of his own. “It is clear that the positive health effects of this product heavily outweigh the negative,” said Mr. Ivens. “I’m not encouraging people to buy them necessarily, but if you have one, definitely keep using it.”