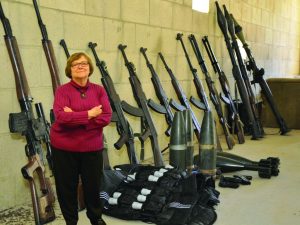 After being a liberal her whole life, Pace Academy history teacher Helen Smith recently decided that it was time for her to answer her true calling: serving as head of the National Rifle Association (NRA). After the recent events regarding gun violence, the NRA has determined that they need a new CEO. The NRA conducted an exhaustive search and concluded that the best candidate for this role would be none other than Ms. Smith. Ms. Smith, a strong advocate for gun rights, has always longed to be an integral part of the NRA. “Guns are my everything and I am thrilled to take the reins of this glorious organization,” Ms. Smith said.

Ms. Smith came to the realization about three months ago that the NRA was the place where she could most fully express herself after tiresome years with Model UN and Model Arab League. Ms. Smith boasts an arsenal of firearms, having collected hundreds of weapons, including a few fully automatic military grade assault rifles. She has been vocal about the most recent events and said that she will continue funding campaigns against gun control advocates. “I will do everything in my power to make sure that Americans have easy access to firearms,” said Ms. Smith.

She is considering reducing the restrictions to buying military grade semi-automatic and fully-automatic firearms. She also believes that the only form of identification needed to buy a firearm is a driver’s license. The new NRA CEO views the mental background tests to be too cumbersome. She has stated that the freedom to buy a gun will be beneficial to the American economy. If Ms. Smith’s efforts are successful, people will be able to purchase a military grade firearm by the age of 16.

So far, one of her prime goals is to arm teachers. “I think all schools will be significantly safer if we arm the teachers,” said Ms. Smith. She has already spoken with Head of School Fred Assaf and Head of Upper School Michael Gannon about arming Pace teachers. With her influence as the head of the NRA, she believes that these reforms will soon be implemented at the Academy.