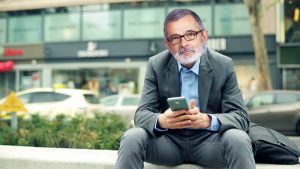 Mr. Carson bought an iPhone approximately two weeks ago, and to date, he has bought 234 games from the App Store. Photo: Michael Simon

If you have had Ricks Carson as an English teacher during his 40-year tenure at Pace, you probably have noticed something unique about him: he rarely uses modern technology. Mr. Carson bought his first smartphone, an iPhone X, just two weeks ago. “It was my wife who convinced me to buy an iPhone,” said Mr. Carson. “She said it was time for me to become more ‘tech-savvy.'”

With his new purchase, Mr. Carson has fallen in love with one specific aspect of Apple products: the App Store. It is even rumored that he purchased over 75 games the very day he bought his iPhone. To date, Mr. Carson has over 200 games on his iPhone. “My favorite games are ‘Words With Friends,’ ‘NBA 2K18,’ ‘Doodle Jump’ and ‘Subway Surfers,'” he said. “I’m constantly playing these games on my phone. During my free periods and on the weekends you can find me glued to my phone. I’ve even started playing games during some of my classes.”

Upper School Head Michael Gannon is aware of Mr. Carson’s slacking due to obsessive use of iPhone games. “I’ve met with [English Department Chair] Marsha Durlin, and at this point, I think it’s safe to call it an addiction,” said Mr. Gannon. “Unless he can handle it himself, some sort of action will have to be taken in the near future.”

Mr. Carson’s condition is no joking matter. All addictions are serious, even addiction to iPhone games. Lately, Mr. Carson has been spending more time playing games than teaching his classes. As a result, his students’ grades have dropped across all of his classes, both sophomore and senior. Understandably, his students have become frustrated with his condition, as they feel it is unfair for their grades to fall solely because he isn’t teaching the material.

“I respect the fact that he is experimenting with various forms of technology,” said senior Sydney Muse, a student in Mr. Carson’s AP Language and Composition class. “However, when it starts to interfere with his teaching and, as a result, our grades, that’s when I start to have a problem with it.”

However, there is one person who still has faith in Mr. Carson: himself. “I don’t understand why everyone is making a big deal about this,” he said. “I like to play iPhone games. That’s it. I don’t have an addiction.”