Lil Pump To Speak at Graduation 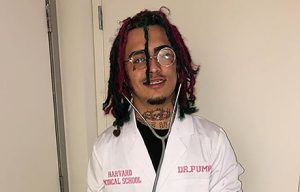 Lil Pump reps his Harvard gear as he gets ready for the concert. Photo: Lil Pump

Yes, you read that correctly. The 17-year-old rap sensation and rumored Harvard attendee is set to speak at Pace Academy’s graduation on May 19. For the past couple of years, Pace has invited stars Robert Downey, Jr. and Matt Ryan to deliver motivational words for the seniors as they prepare for their new chapter in life. The students have loved the celebrity speakers and it will be no different this time around.

Gazzy Garcia, better known as Lil Pump, has recently increased his status from a mediocre SoundCloud rapper to a large scale Warner Bros. label artist. The Pace community is beyond intrigued to have a singer such as Pump convey his wisdom to everyone. “I am excited for the unique opportunity for Pace to host Mr. Pump this year,” said Head of School Fred Assaf. “My sons are a huge fan of his music and find it fascinating that such a young man can make a great deal of money.”

Many rumors have circulated for the past year that Lil Pump decided to drop out of Harvard University. He previously tweeted, “I really did dropout of Harvard to save the rap game.” If that’s not believable enough for the fans, Pump also posted a picture on Instagram about his possible Harvard degree, captioning the picture, “Harvard dropout tape on the way!” He has plans to release a mixtape about his short time spent at the Ivy League institution later this year. Even if Pump did not truly attend Harvard, he does have the “street smarts” to make it to the big leagues of show business and to be successful at a young age.

Lil Pump is one of the few artists who accelerated to fame as a teenager, making millions of dollars a year while signing record deals with some of the biggest names in the hip hop industry. He plans to attend the Pace graduation with one goal, which is to inspire the seniors to have the ambition to accomplish their goals in their  upcoming years. Many of the seniors are nervous about how to be prosperous following college so Lil Pump hopes to minimize that fear. He will share his personal insight and stories but also compare his experience to other artists.

“I admire celebrities who rise to fame so early such as Lil Pump,” said senior Jack Wray. “I enjoy learning about people at such a young age becoming so successful because I hope to do the same one day.” Pump has also said that he plans to give out free “Gucci Gang” shirts to the student body in order to maximize his popularity. The Pace Academy Booster Club will be selling discounted tickets for Pump’s concert at Lakewood Amphitheater two days before the graduation. The parents thought it would be nice to give the students a small graduation present in honor of all their hard work throughout high school.