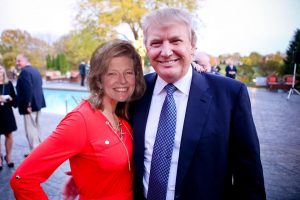 It is 3:54 p.m. on a Sunday when I step through the dusty, wooden doors of Golden Drops Café in Decatur. The lights are slightly dimmed and the morning brunch rush has nearly cleared out. There are few of us in the café; the hipster baristas are musing about Rainbow Kitten Surprise’s new single and the locals are sharing recipes for kombucha tea. To the average coffee drinker, today is a regular day, yet secrecy hangs heavy in the air.

As I make my way towards the counter, I give the barista my name and explain that I am following an anonymous tip given to The Knightly News. The barista’s face contorts, signaling his anxiety surrounding the subject. “They are over there,” he says, pointing me towards a secluded corner of the café. I head towards their table, wondering what to say first, but nothing prepares me for this sight.

The two are tucked in a corner of the shop, invisible to the public eye. Donald Trump is leaning back with crumbs from his half-eaten scone on his face and Pace history teacher Dr. Christine Carter is lost in conversation about the latest novel that she has read. They seem casual and comfortable in each other’s presence. Conversation flows naturally between them as though they are old friends even though they are the most unlikely pair.

At first, I did not believe the tipster when they emailed The Knightly News that they had spotted Donald Trump and Dr. Carter over the last few Sundays getting coffee. It seemed too absurd. But, after receiving photographic evidence from the source, a growing feeling in my gut told me that it was true.

When our source came across the pair at their local coffee shop, the duo’s secret friendship suddenly became the center of Buckhead gossip. “At first, I thought I was hallucinating,” they said. “I shut my eyes, counted to ten and opened them again. But there they were, throwing their heads back in laughter as they sipped overpriced lattes,” said the source who wishes to remain anonymous. Within hours, The Knightly News contacted both parties for comment. However, the Carters and the Trumps declined to address the rumors.

We assembled a team of investigative reporters to cover the case, contacting each of the Carters individually. Sports Editor George Shepherd flew to D.C. to get the president to go on the record. Shepherd returned weeks later unsuccessful and frustrated. “There has to be more to this story,” said Shepherd. “We need a reason why.”

At last, senior Jeb Carter emerged from the shadows for an exclusive interview with the Knightly News staff. Contracts were drawn and the location was set for a private, 30 minute sit-down with Dr. Carter’s golden boy. There were limitations to our questions: no personal inquiries about the family, no accusations. Jeb said he would walk out at any moment if he felt attacked, so we assigned our nicest editor to the job: senior Amy Butler.

Butler found out that the two must have been meeting for years, even before the presidency. “She’s been leaving the house more often as of late,” said Dr. Carter’s son Jeb. “Each time, she has a new excuse: Civil War reenactment practices, Feminist Alliance meetings, or taking mock AP exams. We [the Carters] would have never expected that she was meeting with him.”

Nevertheless, Jeb’s revelations do not explain why. “Our investigation is nowhere near done,” said Butler. “But we have to publish what we have in the meantime.” Until more updates are discovered, The Knightly News encourages faculty and students to contact our helpline.