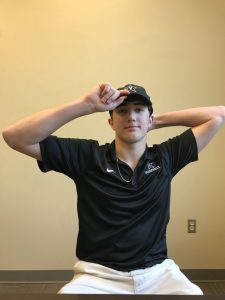 Pace Academy has been the home to a number of outstanding student-athletes, with many excelling in high school and earning college scholarships. But even with all of the great athletes that Pace has produced, one shines above all others: five star recruit Ben “Squatch” Caldwell. The 6’0” 170 lb. sophomore excels both in the classroom and on the football field. Running a 4.3 second 40 yard dash, Caldwell is untouchable on the field. Not only is he quick on his feet, but Caldwell managed to bench press 11 reps of 225 lbs. in the weight room, proving his unmatchable strength.

With such speed and athleticism, one may think that Caldwell has no time to hit the books, but Caldwell takes five AP classes and has a cumulative GPA of 4.0 on the four point scale. The high school standout has already begun to make an impact in the football world and has recently decided which college he will bless with his presence.

According to several sources, Caldwell has received a whopping 20 Division I offers. Although Caldwell has many options of colleges, in his mind, the decision was between only three. “When I sat down and really thought about where I see myself playing, there were only three schools that really caught my attention,” said Caldwell. “My top three schools would have to be: University of Georgia, Clemson University and Vanderbilt University.”

Not only is Caldwell a fan favorite, but Pace varsity football head coach and retired NFL linebacker Chris Slade had some glowing words for his star player. “Squatch is one of the best football players I have ever had the privilege of coaching,” said Coach Slade. “I have been playing football for a long time, and I know that this kid has what it takes to go all the way. His quickness on his feet, strength in the weight room, and the way he leads the team at such a young age proves to me that he is a special kind of player.”

One of Caldwell’s star teammates, senior Jamaree Salyer, also recognizes his talent. “In my four years of playing at Pace, it was not until my junior year that I saw a freshman who could really make a difference on our team,” said Salyer. “Squatch is so athletic that he can play any position he wants. I only hope that he doesn’t switch to offensive guard because I don’t want to ride the bench.”

Although Caldwell will not sign with a college team until his senior year, The Knightly News managed to learn which school he thinks he will choose out of his top three. “Honestly, after deep consideration, I would have to go with my parents’ alma mater, Vanderbilt University, he said.”