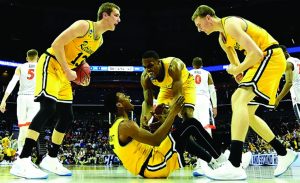 On Sunday, March 18 UMBC supposedly lost to Kansas State 50-43 in a final minute collapse. Investigations shortly followed the game due to the drastic drop off in offensive efficiency from the first round against UVA to the second round against the Wildcats. UMBC shot below 30% from the field and only shot 50% from the free throw line which tipped off some NCAA investigators. Late last night it was revealed that the goals on which UMBC shot were 2.6 inches off center and angled at 9 degrees below the level plane.

After the scandal had been uncovered, controversy ensued. “I do not recall any malicious acts being performed against UMBC in regards to the position of the rims,” said a flustered Charlotte City Council member who wishes to remain anonymous. The Charlotte City Council owns the Spectrum Center where the Kansas State -UMBC game was played. The misplacement of the goal during the first half remains a mystery, but it is certain that the rim Kansas State was defending in the second half had been tampered with. “After missing three of my six shots from the [foul] line I had a gut feeling something was up,” said UMBC guard Jairus Lyles. “I told my coach right after the game and I’m glad [the truth] has come out.”

The UMBC Retrievers squad was the first No. 16 seed to upset a No. 1 seed in the first round of March Madness. The new record for No. 1 seeds against No. 16 seeds in the 64-team era since 1985 is 135-1. Some experts argue it was the greatest upset in basketball history. Their stance is that the Retrievers won in a 20-point blowout and against the top seed in the country going into the tournament. The win was so convincing, that even though the team did not get to play in the Sweet Sixteen, Elite Eight, Final Four or the National Championship, they will be awarded the title anyway.

UMBC players are disappointed that they did not get to fight for the title themselves. “I didn’t want to win on a technicality,” said freshman forward Daniel Akin. “But winning is still winning and it will feel good to look at the trophy in our locker room.”