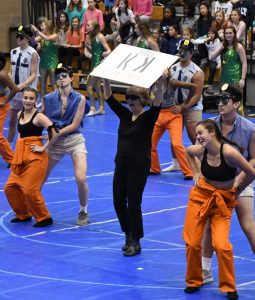 Mrs. Culp appeared as the “Get Out of Jail Free” card in the junior Spirit Week dance in January. Photo: Fred Assaf

Last May, Pace lost one of its most familiar faces for students and teachers in the Upper School. Beth Culp, after working at Pace for 20 years, decided it was time to retire from her prominent role as the face of Student Affairs. However, her retirement was short-lived.

Only nine months after leaving the Pace community, Mrs. Culp has announced her glorious return. She simply missed the students and faculty too much, along with the admiration she received from her student fans. “Mrs. Culp is certainly a fan favorite,” said junior Bay Brickley. “It’s the combination of her bright smile, positive attitude and awesome glasses that make her so admirable.”

However, Mrs. Culp’s replacement, the respected and well-liked Bowen Eagleson, is not willing to relinquish her new role at the Academy. “I have become comfortable with my place in this community and at this desk,” said Mrs. Eagleson. “It is much too early for me to give that up.”

Mrs. Eagleson’s resistance has unleashed a competitive and ruthless side of Mrs. Culp, a side unseen before at the Academy. “What’s mine is mine,” said Mrs. Culp. “If I want my spot back at the desk, nothing will stand in my way.” With this determined mindset, Mrs. Culp marched to Head of School Fred Assaf’s office for a meeting.

When Mr. Assaf asked her reason for wanting to return, she explained how much she missed the community, keeping track of tardies and handing out planned absence forms. That was enough for Mr. Assaf to be convinced. “The tardy sheet is simply not the same without Mrs. Culp,” said Mr. Assaf. “The way she laid it out so perfectly on her desk attracted every pair of eyes upon entering the Upper School.”

Coming back to Pace is something that Mrs. Culp has wanted to do ever since the first day of school this August when she realized the huge mistake she had made. It was for this reason that she accompanied the juniors in their Spirit Week performance in January. “The junior class approached me and asked me to make an appearance in their dance,” said Mrs. Culp. “It was an offer I definitely could not decline.”

Mrs. Culp appeared as the “Get out of jail free” card and the audience was thrilled when they saw who it was wearing those large sunglasses. “I could not contain my excitement,” said senior Khaki Loughran. “I haven’t stopped emailing Mrs. Culp since she left and when I saw that she was really here, I could not have been more exhilarated.”

Mr. Assaf has reached a compromise that will allow for Mrs. Culp’s return while keeping Mrs. Eagleson as well. There will be two co-administrative assistants for Student Affairs that simultaneously work at the front desk. One will be in charge of tracking tardies and the other will account for absences. This way, Pace gains back a valuable faculty member while retaining the new esteemed one as well. “This was the best decision we could make,” said Mr. Assaf. “We found a way to keep two highly regarded faculty members and we look forward to seeing these two faces as we enter the Upper School.”