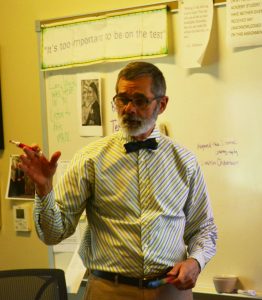 Mr. Carson is currently teaching “The Tempest” in his classroom. Photo: Will Zook

I recently saw  “Black Panther” and am currently teaching “The Tempest.” The latter leaves me dizzy on the page, the former dizzy on the screen. I don’t have Merlin-like or Gandalf powers, I don’t know anyone who does, and I’ve never played a video game (that’s true!). “Black Panther” felt like what I think a two-hour video game would be like, and “The Tempest” dazzles with a mix of unrealistic realism (ha!) and old-fashioned witch-like powers. As a result, my mind is freaking out a little.

The “fantastic” is not the only factor they share. Both deal with race and colonialism, local/world-wide politics, and shifts in power structures. All three are factors in both the text and the “subtext” of both pieces. Shakespeare addresses the racial stereotypes and values Europeans brought to their explorations from the 1400s to the 1700s. Whether he is a man of his time and dramatizes its prejudices, or is a forward thinking man and critiques them, is a matter of much debate among Shakespeare scholars. The movie is not ambiguous about race. The “mythic” country of Wakanda is the origin of an African society with tech and wisdom far excelling Europe’s, a clear critique of stereotypes. Americans, whom we think of as tech wizards, are scorned several times, and may as well be using an abacus.

Politics are based on intrigue, jealousy, and trickery in both works. It’s a dirty business, but “Black Panther” puts a hopeful spin on politics by suggesting that the “good” and “legitimate” will overwhelm the “bad” and “expedient” to the betterment of the human kind. Both involve rightful leaders who commit errors or have weaknesses that allow perfidious opponents to gain, at least temporarily, the upper hand. Shakespeare solves Prospero’s problem through his control of magic in the form of Ariel, an invisible spirit; the movie solves T’Challa’s through his fantastical superhero powers derived from vibranium, a non-existent “magical” metal. In both works, the main character manages to defeat and punish the villains and restore, at least for a while, order and safety amongst his people.

There are also differences. Shakespeare was more the realist than Stan Lee, whose 1966 comic strip “Black Panther” was based on. But more significantly, “Black Panther” turns renaissance racism upside down by making an African nation the world leader in technological and sociological liberalism. White people are in the tech backwaters. The representative “native” in “The Tempest,” a “monster” named Caliban whose mother was a witch, is often interpreted as being a common view of of “primitive” peoples Europeans set about “enlightening” as they “discovered” the world. Shakespeare leaves Caliban, the “monster,” on the island at the end when the Europeans return to Italy, where he remains unchanged, a misshapen creature with savage traits.

I believe Shakespeare would have loved “Black Panther.” Essentially,  “Black Panther” and “The Tempest” are platforms the artists use to transform reality into fantasy and back again (mostly). “The Tempest” concludes with Prospero relinquishing his magic powers and assuming his position as Duke of Milan, and “Black Panther” ends in a completely real setting: a meeting of the UN in Vienna where T’Challa appears before world leaders and offers the secrets of Wakamba in hopes of nurturing world peace. Does this difference imply that societies have advanced in their racial thinking since 1600? I think so, yet we all know that racism remains a flaw in the human spirit. At times, it seems to reside at the genetic level, yet as “Black Panther” suggests, we all might enter under its mesmerizing spell and believe in the future.