Pace Community Participates in March for Our Lives – Atlanta 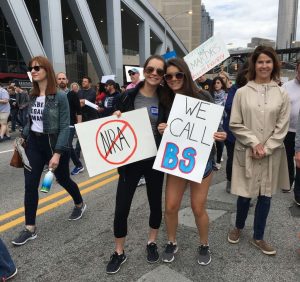 (L-R) Sophomores Emily Caton and Lenox Herman participate in the Atlanta March for Our Lives on March 24. Photo: Virginia Hobbs

On March 24, over 30,000 people congregated at the Center for Civil and Human Rights in Atlanta to participate in the “March for Our Lives.” The march, which was a world-wide event drawing millions of people, was conceived of by student survivors of last month’s mass shooting at Marjory Stoneman Douglas High School in Parkland, Florida. These survivors were some of the many speakers at the march on Saturday in Atlanta and cities around the U.S.

In Atlanta, people of all ages engaged in the event to demonstrate their support for implementation of universal, comprehensive background checks for gun buyers, a ban on assault weapons and high-capacity magazines, a digitized, searchable database of gun buyers and purchases, and other measures to stem future gun violence.

People filled the streets for the first hour of the march to listen to individual speakers and performances. Bus after bus arrived as a continuous flow of people joined the crowd. Large video screens with sound systems were situated throughout the area so that the crowds could hear and see the speakers. Music blasted as people sang and danced with their various signs depicting images of love and messages of opposition to the National Rifle Associatoin (NRA) and gun violence.

Atlanta Mayor Keisha Lance Bottoms and civil rights icon Rep. John Lewis spoke along with students from local schools like The Paidea School and students from Marjory Stoneman Douglas High School. “The first speaker was a girl named Savannah [Nemeth] who read perhaps the most inspirational work I have ever heard,” said math teacher and freshman dean Krista Wilhelmsen. “It was truly amazing – raw, heartfelt and emotional. I am trying to find a copy for myself to keep.” Nemeth is a sophomore at Collins Hill High in Suwanee, Georgia, and the poem she composed and recited is called “Rude Awakening.”

The performances included a number of poems and songs promoting unity and voter registration for the upcoming election. “I especially loved John Lewis and his presence,” said junior Davis Mathis. “I thought the whole event was so amazing and I’m really impressed with all the students who organized it.”

The foot traffic while walking was heavy and energetic and the streets were much too small for the large numbers of people participating. A handful of protesters against the cause yelled at marchers on the streets. However, everything remained civil. Chants including “Enough is Enough” and “Not One More” echoed off the buildings and smiles radiated throughout the crowd.

School counselor Kacy Brubaker, English teachers Ricks Carson and Emily Washburn, Spanish teachers Paula Pontes and Allison Riley, Mrs. Wilhelmsen and Knightly News advisor Lee Wilson were some of the faculty members who joined students and parents to represent Pace at the event. “I liked seeing so many young people registering to vote,” said Dra. Pontes. “I hope they register THEN do vote.”

Once the marchers reached the Georgia State Capitol, the end of the march, they were greeted by volunteers registering people to vote. The marchers also got to listen to more speakers at Liberty Plaza. “It was incredible to see so many young and diverse voices joining each other to protest and flex their democratic muscles,” said Ms. Riley. “I left feeling very hopeful that the next generation is realizing how much political power they really do have.”