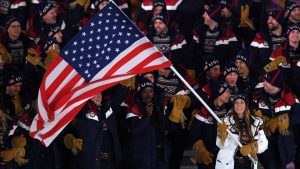 Two years after the XXXI summer Olympiad in Rio, the Olympics made a return this past month for the XXIII Winter Games in Pyeongchang, South Korea. These games produced highlights aplenty from the United States. The year 2018 marked a congregation of athletes young and old, including those known to the mainstream and new names who’ve recently burst onto the scene.

One of the United States’ most dominant sports of the Pyeongchang Games was snowboarding. Starting off the games for the U.S. was 17-year old Red Gerard, who won the first gold for America in the slopestyle event. Gerard had quite the eventful 24 hours after sleeping past his alarm, losing his jacket, cursing on live television and winding up on the top of the podium at the end of the day. Next came phenom Chloe Kim, who especially valued these games because she is the daughter of Korean immigrants. Only 17 years old, Kim commanded her event, posting a score of 98.25 out of 100 and beating the silver medalist by eight and a half points.

Snowboarding legend and now three-time gold medalist Shaun White hit the men’s halfpipe, hoping to get revenge after missing the podium at Sochi in 2014. Trailing Japanese snowboarder Ayumu Hirano, who posted an excellent score of 95.25, White had one final run to take the gold. Nailing every trick, White finished with a 97.75, stealing the gold and reclaiming his crown.

Outside of snowboarding, the U.S. garnered other gold medals, some expected, and some of which were very surprising. Mikaela Shiffrin unsurprisingly took gold in the women’s giant slalom, due to her growing support and expectations coming into the games. The two most shocking U.S. victories came with the upsets in men’s curling and women’s hockey. “Team Reject,” as the curling team came to be known, defeated Sweden 10-7 to win the first curling gold medal in U.S. history. John Shuster, Tyler George, Matt Hamilton and John Landsteiner came together to pull off an incredible upset. Topping off the games for America was the women’s hockey team, who defeated the powerhouse Canadian team 3-2 after a thrilling overtime and shootout, handing Canada their first loss since 1998 and securing the first gold medal for the U.S. since the same year.

While the medal count was down this year to 23 after medal counts of 28 and 37 in the two prior Olympic Games, Pyeongchang gave American Olympians of all ages the opportunity to shine on the world’s greatest stage. As America sees a shift to a younger generation of athletes, new superstars are emerging onto center stage and look to excel in the years to come.