Virtual Reality Offers a Glimpse Into the Future of Technology 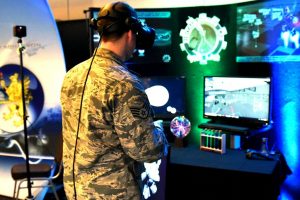 Flight Training has become easier thanks to high quality VR headsets which show officers how to complete tasks step by step.
Photo: Sheppard Air Force Base

Over the past few years, the virtual reality (VR) marketplace has exploded with multiple headsets and concepts that could potentially shape our future. However, many people may not know exactly what VR is. Currently, you put a VR headset on and have a 360 degree view of a computer-generated scenario.

VR’s explosion in popularity has come about mostly due to video games. Some of the biggest game developers, like Bethesda and Square Enix, have begun to create versions of some of their flagship franchise games in VR. Recently, a game called “VRChat” has seen a drastic increase in the number of players. In this game, people create avatars based on practically anything and go around to different user-created worlds and chat with other players.

There are two primary brands of VR headsets that people buy to play VR games: the HTC Vive and the Oculus Rift. Both are fairly expensive, with the Oculus Rift priced at $400 and the Vive at $600. Recently, however, Sony released their own headset titled Playstation VR to compete with HTC and Oculus, but the downside is that it is only compatible with the Sony Playstation.

VR has a plethora of different uses outside of video games. In the field of medicine, VR is being used for both doctors and patients, and its results have been exciting. Surgeons use a series of 2D images to piece together a patient’s complex anatomy. EchoPixel has created a platform called TrueVR which allows physicians to view a patient’s organs and body tissue in a 3D form. Meanwhile, patients have been introduced to VR worlds to reduce stress levels. Rehabilitation after a stroke is a tedious process, but the Swiss company MindMaze has created a program called MindMotionPro which allows patients to practice lifting their arms and moving their fingers.

Armies across the world use VR for specific training like pilot training and even parachute simulation. Virtual flight simulators have been used for over 20 years to simulate the experience of flying. NASA has also used VR for a long time, most notably for the use of immersive VR to train astronauts in zero gravity situations.

The future of VR is upon us. Two years ago Microsoft announced their Hololens, which gives a mixed reality experience as opposed to a completely virtual experience. The uses for technology like this are endless and it can benefit architects, technology developers and doctors in ways that were previously unimaginable.