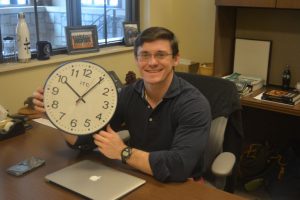 In 1784, while acting as an American delegate in Paris, Benjamin Franklin came up with an idea in his essay “An Economical Project” that changed the way we keep time. He estimated that if Parisians woke up at dawn and went to bed at dusk, they could save the equivalent in today’s dollars of $200 million “through the economy of using sunshine instead of candles.”

But it was an Englishman named William Willett who came up with the idea of moving the clocks forward between the months of April and October. He proposed this idea in 1905, but Willett died before seeing his idea come to life.

Germany was the first country to implement daylight saving time, in 1916 during the heat of World War I. The United Kingdom followed suit just weeks later. The United States enacted the initiative in 1918. Immediately after the war, daylight saving time was repealed, largely due to the unpopularity among farmers because they had to wait an extra hour each morning for the dew to evaporate from their crops.

It was reintroduced during World War II, and again repealed almost immediately after the war’s end. Finally, in 1966, Congress passed the Uniform Time Act, which finally made daylight saving time a standard in the United States.

“I think that the modern world we live in today, especially in a place like Pace, does not necessarily need daylight savings, and that’s simply because the world has adapted and changed to where the farmers are not necessarily a priority, and they also have other resources that can provide light much longer than an hour of more sun can,” said Sophomore Dean and Varsity Lacrosse Coach Grady Stevens. “However, I do like the system for sports because it is much more fun to practice while the sun is still up instead of while it’s setting, and it’s also warmer.”

Spanish teacher Paula Pontes also enjoys daylight saving time, but for a different reason. “I was born in Brazil and I visit a lot, so I like the concept of daylight savings because the time change from Atlanta to Brazil is only one hour.”

While daylight savings was intended to help people and armies utilize more daylight hours in the evening, today there are mixed opinions about whether the system is needed. The state of Arizona, for example, opted out of the Uniform Time Act in 1968, with the exception of the Navajo Nation, which does observe daylight saving time.

Categories
Life At The AcademyLifestyle