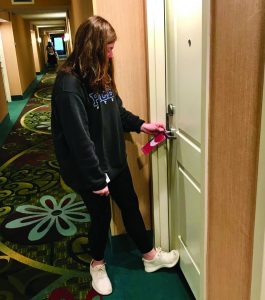 “Do Not Disturb” signs are a trademark of the hotel industry, guaranteeing privacy and peace for the duration of a guest’s stay. For decades, hotels have allowed customers to hang the signs on their door handles for as long as they want. Is this too lenient? Some hotels believe so. After the devastating mass shooting on Oct. 1 at the Route 91 Harvest music festival on the Las Vegas Strip in Nevada, the use of this ubiquitous sign needed rethinking.

Home-grown terrorist Stephen Paddock shot and killed 58 people and injured 851 from a suite in the Mandalay Bay Hotel that October night. The 64-year-old transported suitcases of weapons through the hotel undetected. The amount of privacy the hotel provided over a period of days ultimately aided Mr. Paddock in carrying out the disastrous event.

Since then, several Las Vegas strip hotels and four Walt Disney World hotels in Orlando (the Polynesian Village Resort, the Grand Floridian Resort & Spa, the Contemporary Resort and the Bay Lake Tower), have all replaced the “Do Not Disturb” signs with “Room Occupied” signs. The hotel staff are able to enter the rooms before the end of every 24-hour period despite the presence of a sign. However, if the sign is on the door, the employee must knock and identify themselves before entering. Although the rule could be viewed as an invasion of privacy, if done correctly, it is a valid step towards improved safety around the country.

There is no justifiable reason for leaving the “Do Not Disturb” sign outside of a hotel room door for more than 24 hours. There should usually be at least 10 minutes in every guest’s stay each day that they are doing something either outside the hotel room or inside the hotel room that requires little privacy. If this is the case but the customer disagrees, it gives reason for the hotel to be concerned with the guest’s intentions.

In addition, every hotel room is the property of the hotel owner or business, not the customer. Hotel managers have the right to create privacy regulations that protect the safety of all their guests. If they believe someone is obstructing the law or doing something harmful on their property, they have the right to try and manage it.

In order to apply the rules successfully, the hotel needs to create a contract with each guest before they complete their purchase. The contract should require a signature agreeing to take down the “Room Occupied” sign once every 24 hours. The hotel could provide an additional smartphone application which would allow the guest to notify the hotel when their room is free to enter. The app would also notify the user how much time they have left in the 24-hour period. If the time runs out, the hotel staff has permission to come to the door and ask to come in.

This will help avoid unwanted hotel employee visits and miscommunication between hotels and their customers. Ultimately, the new rules will increase hotel safety, and that is one of the hotel industry’s top priorities.