Net Neutrality Laws Have Been Repealed, But There is Still Hope 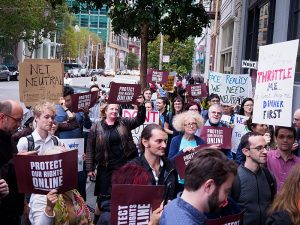 There were many rallies against the repeal of Net Neutrality during November and December of 2017. Photo: Flickr

Throughout November and December, Twitter feeds were filled with posts rallying against the Federal Communications Commission (FCC) and Ajit Pai, the chairman of the FCC, on the issue of net neutrality. Despite the large numbers of people talking about it, many do not know what net neutrality means and what the consequences of its removal are.

With the current net neutrality laws, all internet data must be treated equally by Internet Service Providers (ISPs) and these ISPs cannot discriminate or charge differently based on user, website, platform or content. If these laws disappear, then ISPs like Comcast and Verizon can restrict content behind paywalls in order to charge extra for access to specific websites. For example, they could decide to charge an extra $15 a month (or more) for customers to gain access to video streaming sites like Netflix, YouTube and Hulu.

During Obama’s presidency, The FCC passed a law in 2015 that made broadband internet service a state telecommunication service, thereby preserving net neutrality. On Dec. 14, 2017, the FCC voted 3-2 to repeal the current net neutrality laws and now, the U.S. Senate is one vote away from undoing that action. Fifty Senators, including all 47 Democrats, two independents, and Republican Senator Susan Collins of Maine have endorsed the Congressional Review Act (CRA) to restore regulations preserving net neutrality. They need one more Republican to ensure CRA’s passage.

If it passes the Senate, it still has to get through the House, and the president would need to sign it. The battle is also being fought in the courts, with the attorneys general of Washington state and New York filing suit against the FCC.

There is still hope, but the past has shown that ISPs have immense control over our internet services when net neutrality laws are not in place. Before the current net neutrality laws, Comcast secretly throttled or slowed down uploads from peer-to-peer file sharing applications like BitTorrent, which is a protocol used to share large files over the internet like movies and music. Comcast did not stop throttling these BitTorrent applications until the FCC ordered them to cease. Throttling and paywalls are almost certain with the repeal.

Surprisingly, millions of people sent letters and emails to the FCC begging them to not repeal these protections, but Mr. Pai and the FCC didn’t give these people a lick of attention and chose to rescind net neutrality without mentioning the comments once. Throughout the net neutrality controversy, Mr. Pai never gave a reason as to how the repeal would benefit the American people. He never sat down with any of his critics to make a persuasive case as to how net neutrality will be good for the country.

Republican congressmen have been bought out by these ISPs to get net neutrality repealed. Companies and organizations seeking to repeal net neutrality spent $110 million in federal lobbying in 2017, according to OpenSecrets.org. Congressmen were given thousands of dollars for their votes this year, with some legislators receiving over a million dollars in donations since 1989, according to The Verge. It seems almost as if these congressmen do not care about how the repeal will affect the American citizens. The arising question is how we can trust our congressmen if they can simply be bought out by money. In the future, other companies could do this with disastrous results.

The public outcry against the repeal has been unreal so far and it would surprise me to not see some response from the Republican congressmen. Amongst the millions of messages sent to the Senate, thousands of calls were made to Republican senators and representatives, yet none of these calls seemed to help at all. The one vote will be hard to obtain, but the people can certainly project their voices of discontent so that the rules can stay intact.