Girls Lacrosse Gets a Fresh Start 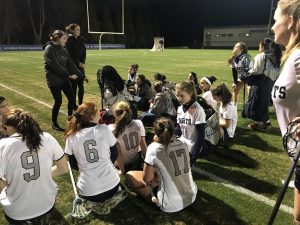 The Pace girls varsity lacrosse team underwent major changes at the beginning of the 2017-2018 spring season, including the introduction of a new coaching staff and the creation of a junior varsity team. Girls lacrosse has never before had a JV team, but interest in the sport has consistently increased over the years, so the new JV team was created to include mostly freshmen. Although it is a rather small team of players, this is a step forward for the girls lacrosse program.

Assistant Athletic Director Courtney Morrison was the head coach for the varsity team for previous seasons, but she is stepping aside to devote time exclusively to the administrative position, as she recently had another baby. The new head coach is Amanda Guthrie, a community coach who played Division One lacrosse at the University of Detroit Mercy. She also coaches a club team at Storm-LB3 Thunder Lacrosse. Joining her are Assistant Coaches Molly Millard and Sydney Holman. Coach Millard played as a defender for the University of Virginia, and Coach Holman played as an attacker for the University of North Carolina, Chapel Hill, where she won the National Championship.

With this drastic change in the coaching staff, the girls lacrosse program is headed in a new direction. “The foundation we want to create is one that helps the girls see how truly valuable they are,” said Coach Guthrie. “From team manager to our potential All-Americans, we want every girl to see how great she is.” Coach Guthrie wants every player to see how her unique role on the team helps advance Pace lacrosse, and she wants to build the mindset that a win is not just based on the scoreboard, but also on if a player walks off the field feeling good for exactly who she is. “We want to create a new culture that fosters leadership, team camaraderie and an internal drive in each girl to want to step onto the field and put in the work to become better,” said Coach Guthrie.

Junior Madeline Arenth is especially excited for the new coaching staff this season. “I’m really looking forward to seeing how the rest of this season goes,” said Arenth. “We’re extremely fortunate to have Division One coaches, and we’re all excited to learn from them.”

Though the team started the season off with a loss to Lovett, stick skills and game IQ have increased considerably. “We just look like a completely different team,” said sophomore Claire Wierman. “Most of us are returners, but we’re clicking really well and we’re playing really great.”