‘Fortnite’: A Game On the Rise 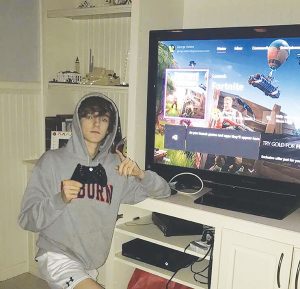 Sophomore Sam Adams loves every aspect of the game and what it brings to the table. Photo: George Adams

Sophomore Ben Crawford sits in his dark basement, microphone plugged in, music blaring while he is frantically clicking the Xbox controller. He is playing “Fortnite,” a video game that was originally released on PC only, but has recently become wildly popular worldwide.

The game is one of the most interesting video games in recent memory, not only because of the game itself, but primarily because of the buzz surrounding it. In a very short amount of time, the game went from being little known to one of the leading games on the market. Some people think that it may be because it’s the only free Player versus Player (PvP) console game, and there is simply no other good option.

Crawford, however, has a different opinion. “I think that the game has become so popular because of how many different aspects it brings to the table,” he said. “Not only does it require skill, it also requires immense planning and guessing. It’s very entertaining and enjoyable to play and I think it can be used as sort of a stress reliever to take your mind off school. At the very least, it’s a fun way to connect with your friends.”

Crawford is not the only one who thinks this way. “The game is just genuinely enjoyable,” said sophomore Sam Adams. “It allows you to take your mind off things, have fun and talk to your friends, all at the same time. It’s everything you could ask for in a video game.”

“Fortnite” was released on gaming consoles on Sept. 26 by Epic Games. The goal of the game is to defeat all other players in the game. With close to 100 people in one “lobby” at a time, the game uses a “Battle Bus” to transport players from the lobby onto the map, where they then deploy out of the bus and parachute down to earth. There they begin looting houses and searching chests in order to acquire guns, healables (which are used to boost and restore players’ health) and resources to survive. Once achieved, the players then turn their attention towards each other. In solo mode, it is the last one standing, meaning the goal is to be the only one left on the map.

However, when playing as a “duo” (a two player team) or a “squad” (four players), the rules change a bit. The goal is now to carry your “squad” or “duo” to victory and be the last team standing, not necessarily the last player standing.

The developers ran into a problem, however, when they realized that the map was too big, and, as the players dwindled down, it became harder and harder to eliminate people as they became further and further separated. To solve this, they created “the storm” which forms at the beginning of games and continually shrinks the playing field until the game ends (think “Hunger Games”). If caught in the storm, you begin to lose your health, and will eventually die.

“Fortnite” has achieved extraordinary popularity in a matter of months, and because of this, some may expect a quick and bitter crash for the game. However, there is a different feel to this game. “There are so many aspects of this game that make it so enjoyable, so I think that ‘Fortnite’ is here to stay,” said sophomore George Adams.