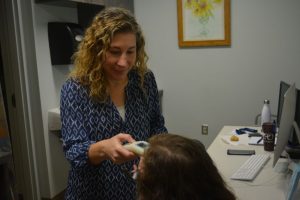 Nationwide, the flu this season has caused the highest number of cases and deaths since the swine-flu epidemic of 2009. The national average for doctor’s visits related to the flu is normally two percent. This year, the number has risen to about eight percent of visits. Deaths from the flu and pneumonia, which are closely linked, have risen to an estimated 4,000 per week, according to the CDC. Across the country, more than 63 of these deaths have been children. Twenty percent of the children who died were never vaccinated for the flu.

According to the Georgia Department of Public Health, flu related deaths in Georgia have risen to over 66 people this year. Doctor visits in Georgia related to the flu are nearly eight times higher than the average, at a remarkable 16 percent. According to the Georgia Department of Health, the flu season is not over yet and many more cases will emerge, with the death toll continuing to rise. This year has had the highest number of deaths due to the flu ever in Georgia, even higher then the swine-flu epidemic in 2009. Most of the deaths in Georgia were people over the age of 65. The flu drastically affects older people because they have weaker immune systems.

Georgia’s daily student absentee rate is nearly five percent since the flu season began. At Pace, the flu has affected attendance for both faculty and staff. Along with science department chair John Pearson and French teacher David Matanes, many teachers have missed valuable class time due to the flu. Every morning in assembly it is clear that more seats are vacant than ever during the first semester. “I had to go home mid-assembly last week due to nausea and heat flashes,” said junior Madeline Janki. “I believe it was the flu, but I got over it before playing against Lovett in basketball that Friday.”

It is not too late to prevent the effects of the flu. Vaccines are still available around Georgia, although they are running out fast. A lot of people are at an increased risk of serious flu-related complications because of poor immune systems and health issues. By going out in public, many people are put at risk. If people who are infected stay inside and stay away from others, the flu season’s effects will slowly decrease, ultimately saving lives.

Categories
Life At The AcademyLifestyle