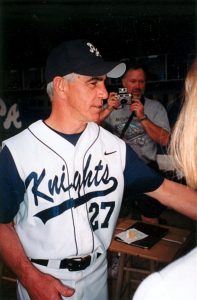 “Kind, gentle…and brilliant.” When describing Math Department Chair Charlie Owens, English teacher Rick Canfield speaks with admiration. “I remember when I first came here [Mr. Owens] was teaching in the attic of the Castle,” said Mr. Canfield. “Do you know how big those windows are?” Making a small square with both of his hands, Mr. Canfield demonstrates the size of the antique windows. “If there had been a fire,” he continues. “They all would’ve been gone.”

However, Mr. Owens has never let obstacles stop him from teaching. Ask math teacher Heather McCloskey. As a student, Dr. McCloskey remembers sitting on the floor of Mr. Owens’ office to learn a math class that Pace did not officially offer. Why? Dr. McCloskey smiles as she says, “just because he wanted to.”

In December 1968, Mr. Owens joined the Pace Academy faculty. He began as a math teacher with a focus in calculus. It was not until the next year that Mr. Owens began his position coaching the baseball team. Under his guidance, the Knights won more than 500 games, three state championships and eight region championships. He also shepherded seven players towards signing professional baseball contracts. Mr. Owens coached the Knights until 2009 when he stepped down because of the lengthy time commitment.

Mr. Owens pioneered the AP Calculus program and was among the first teachers to teach summer school. He has served as both the assistant head and the head of the Upper School. He received Pace’s prestigious Kessler Excellence in Teaching Award and was named STAR teacher six times. In 1988, Pace’s yearbook Pacesetter acknowledged that “it is Charles Owens’ genuine warm manner that captivates the people around him.” He is indispensable. Currently, Mr. Owens has settled for a more ‘relaxing’ position as chair of the math department. He has served in that position on and off since the 1970s.

Nowadays Mr. Owens works more behind the scenes. Besides his 50 pre-calculus students, many Pace Academy students could not point you to his office. Nevertheless, there is respect associated with his name. Faculty and students alike notice the Charlie Owens Baseball Complex at Riverview and his photo on the cover of The Knightly News’ first issue this year. “Put simply,” said Mr. Gannon. “He is a Pace legend.”

Although he is no longer running the school or pioneering the baseball program, Mr. Owens is forever engrained in Pace’s history. He represents the character that Mr. Whyte calls upon students to uphold every day, the excellence to which Pace students strive to achieve and the commitment exhibited by faculty. After 50 years of setting an example, Mr. Owens deserves a break, but that will not make his absence next year any easier for his Pace family. He will forever be a Knight.