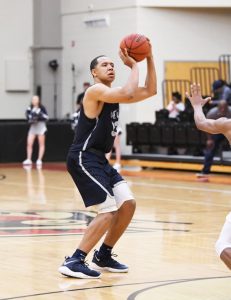 Senior forward Isaiah Kelly drained this three point shot with under 30 seconds left to put the Knights within three points during the Sweet 16 game against GAC. Photo: Fred Assaf

Silence enveloped the Knights’ locker room. There were no words to be spoken. The only sounds came from the occasional rummaging through a backpack. Heads were dropped and shoulders slouched. The season was over.

The Pace Academy boys varsity basketball team lost a three-point heartbreaker to the talented Greater Atlanta Christian School on Feb. 21, ending the Knights’ hopes of back-to-back-to-back state championship titles. The game was intense for all 32 minutes, and despite the Knights’ early exit from the Georgia High School Association State Playoffs, their season was far from disappointing.

Early in the season, the team lost seniors Harrison Lewis, Jonathan Rushton and Michael Simon due to various injuries. However, the Knights still had three seniors in Isaiah Kelly, Zack Leven and Jack Wray, who led the squad phenomenally all season. Kelly was the Knights’ leading scorer in the regular season, the region tournament and the state playoffs and surpassed the 1,000 point mark on Senior Night on Feb. 2 during a 80-33 route over Stone Mountain.

The Knights’ 11-3 region record placed them as the number two seed entering the region tournament, with losses coming from Towers and from Cedar Grove, twice. In the first two rounds of the region tournament, the Knights defeated Stone Mountain and Towers by scores of 73-38 and 54-52, respectively. The two-point victory over Towers is credited to freshman center Cole Middleton’s last second jump shot.

In the region championship game, the Knights lost another closely fought game to the Cedar Grove Saints by a score of 45-44. However, the Knights secured the number two seed heading into the state playoffs with their wins over Stone Mountain and Towers.

Needless to say, the Knights were riding momentum heading into the state playoffs. Over the previous nine games, the Knights were 7-2, with their only losses coming from Cedar Grove, and the region championship one-point loss proved that the Knights were closing the gap between them and the Saints, who had previously beaten the Knights by 11 and 15 points.

Pace Academy’s draw matched them up with Sonoraville High School out of Calhoun, Georgia in the first round of the state playoffs. The Knights began their quest for a third straight state championship ring with a dominant performance on Feb. 17. The Knights defense was able to slow down a fast-paced, high-powered Sonoraville offense by containing their best player. Offense came easy for the Knights, as Kelly and Middleton were able to dominate inside the paint. The Knights routed Sonoraville, cruising to a 62-43 victory which sent them into the Sweet 16.

The Knights obviously did not fare as well against the Spartans from Norcross. However, this game was arguably the Knights most well-played contest by the team all season. This game was truly a team performance, as the Knights played 11 of 14 available players, with key performances coming from freshman Jayden Thomas, sophomore Reign Watkins and junior Jaquari Wiggles. The game came down to a last second three-point attempt by Watkins, which clanked off the left side of the rim.

Undoubtedly, the biggest concern of the season for the Knights was how the team would replace the large void, both literally and figuratively, left by the absence of Wendell Carter, Jr. who now plays for Duke. Although the Knights did not return to the state championship game, the team was able to come together throughout the long season and learn to play without the ability to be bailed out by the 6’11 Carter, Jr. This season, the Knights averaged around 57 points per contest, while only giving up around 50.

Despite the quick exit from the state playoffs, 10 of the Knights’ 14 players were underclassmen. The experience they gained throughout the season, whether it be region championships, Sweet 16s or national tournaments, was priceless, and will prove helpful for the squad in the coming season. Furthermore, the team knows what it is like to lose in a heartbreaking game. The team will be hungry for another run at the title in the 2018-2019 basketball season.