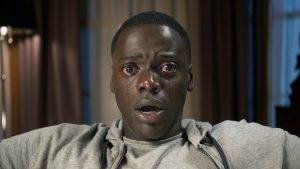 Daniel Kaluuya plays Chris Washington in the highly acclaimed “Get Out.”
Photo: BagoGames

As March begins, arguably one of the most important award ceremonies of the year is approaching, the Academy Awards, also known as the Oscars. This March 4 marks the 90th installment of the award ceremony that celebrates the achievements of many notable movies released over the past year.

The Academy Awards is typically hosted by a comedian or entertainer who runs the entire show. After his successful performance at the 2017 Oscars, Jimmy Kimmel was asked back to host this year’s Oscars. The Academy Awards are given in categories such as: Best Picture, Best Actor in a Leading Role, Best Actress in a Leading Role and many others. With last year’s winner’s of “Moonlight” for Best Picture, Casey Affleck for Best Actor and Emma Stone for Best Actress, the 2018 Oscars will soon crown the winners of this year’s best movies.

Nine movies were nominated for this year’s Best Picture award, but two movies in particular stand out. One of the more favored movies to win is “Get Out,” written and directed by Jordan Peele. “Get Out” is an interesting take on racism in today’s world with the horror effect of a Hollywood movie. “Dunkirk,” another top rated movie, is the story of British and French soldiers stranded on a beach in France in World War II with German forces surrounding them. “I thought that ‘Dunkirk’ was fantastic,” said English department chair Marsha Durlin. “The portrayal of a common soldier by Fionn Whitehead was amazing.” Mrs. Durlin’s favorite character in the movie was Tom Hardy, portraying a British fighter pilot.

“Although many parts of ‘Dunkirk’ were dramatic and fun to watch, there was never a shot of the British citizen ships all crossing the horizon with all of the soldiers cheering,” said Mrs. Durlin. “Although this was meant to be historically accurate, a final shot with the escape of the soldiers would have made a great addition to the movie.”

Although “Dunkirk” is a favorite of many, “Get Out” may very well come away with the Best Picture Oscar. “Out of all of the nominations, my personal favorite was ‘Dunkirk,’” said English teacher Bailey Player. “The cinematography was fantastic, and the director Christopher Nolan was great. But, if I had to vote on which one will win the best picture category, I would have to vote for ‘Get Out.’”