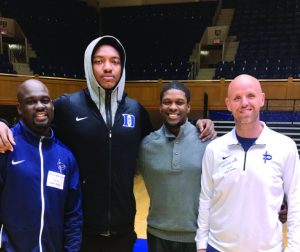 Virtually every member of the Pace community remembers the charismatic, 6’10” senior who brightened our campus – on the court, on the stage and in the classroom. His name is Wendell Carter, Jr., and his journey has continued at Duke University. Carter was a two-time GHSA state champion, a McDonald’s All-American and played in the Jordan Brand Classic. Coming out of Pace, Carter was ranked the No. 7 player in the nation by 247Sports and No. 5 by ESPN and had dozens of schools recruiting him. Carter narrowed his college list down to Georgia, Duke, Harvard and Georgia Tech before committing to Duke on Nov. 23 by posting a James Bond-themed commitment video.

Carter has had a remarkable freshman season at Duke so far and has played an integral role for the Blue Devils. Duke has several big time players like Grayson Allen, Marvin Bagley III and Trevon Duval, but these stars have not stopped Carter from standing out on his own, making a name for himself on college basketball’s biggest stage. Carter’s efficiency on the court has been unmatched, as he dominates several stats in the ACC, one of the NCAA’s most impressive conferences. Carter is third in the ACC in field goal percentage (.612), third in total rebounds (225), second in offensive rating (131.5) and second in player efficiency rating (30.4).

Several current Pace students and faculty have continued to watch Carter thrive at the next level and are always on the lookout for the Duke hoops team. In late October, Pace’s fifth grade class went on a field trip around the Carolinas and made a stop at the Duke basketball practice facility. Carter carved time out of his busy schedule to talk to the class and take some pictures before an exhibition game versus Northwest Missouri State.

Other Knights haven’t had the opportunity to reconnect with Carter since he arrived at Duke, but that has not stopped them from continuing to watch him play. “Every time the Duke games are being televised I make sure to tune in to watch Wendell,” said senior Charlie Stonecipher. “It’s pretty cool to know that I was teammates with him at Pace and now he’s playing with the best.” Junior Patrick Markwalter has also been watching Carter throughout the season, but cannot bring himself to cheer on the Blue Devils. “I’m a Georgia Tech fan so there’s no way I can pull for a different ACC team like Duke,” said Markwalter. “I’ll be one of the first people to buy his jersey once he gets to the NBA, though.”

After all of his early success at Duke, what will be the next step for Wendell? ESPN staff writer David M. Hale wrote a piece about how, in a way, Wendell is currently a “forgotten star” for Duke, but is playing one of the most important roles for the team. Hale asked Carter about the tattoo across his chest and noted that the “wings that poke out from his jersey serve as a fitting tribute to a career about to take flight.”

This impression that Carter’s career is just getting started could not be more true. Bleacher Report’s Jonathan Wasserman predicted that Carter would be picked 11 overall by the Utah Jazz in a 2018 NBA Mock Draft. “A skilled big with post footwork, shooting touch and rebounding instincts, Carter averages 21.9 points and 14.3 boards per 40 minutes,” said Wasserman. “His value would get a boost if he can show he’s quick enough to guard power forwards.”