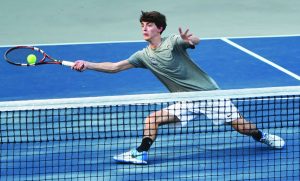 The “cramp match” of the 2016 championship match against Lovett featured then-junior Prushanth Kumar ’17 and his severe hamstring cramps that had not appeared until the championship. He finished the match through excruciating pain, but was unable to secure the victory.

The 2017 state playoffs were played without the help of star player Will Funston. The junior broke both of his wrists in the region tournament, unsurprisingly against Lovett. “I was back pedaling and fell on my wrists,” said Funston. “After a couple points thereafter I had to forfeit the match and soon learned I fractured a growth plate in my right hand and suffered a hairline fracture in the left. We had been working hard all year to get to state and it was tough sitting on the bench knowing I couldn’t help.” It took four months for his wrists to heal, but now he is healthy and battling well at the No. 1 singles spot this season.

Senior David Leven is undefeated at No. 1 doubles this season and played No. 1 doubles in the past three state championships. “Of course it hurts to lose in the finals, but I don’t think it’s truly as devastating as most people would think,” said Leven. “It’s an awesome experience to play in the state finals in the first place.” His teammate, sophomore Rohan Jatar, does not share Leven’s attitude towards losing in the finals. “It s*cks to lose the final match after you’ve worked the whole season to get there; it makes me want to win this year that much more,” said Jatar.

This year could finally be the year, however. The team lost two starting seniors to graduation and now the four juniors and sophomores have more experience and talent. “Despite our past I’m optimistic that we can win this year,” said Leven.

The girls varsity tennis team has experienced similarly troublesome state tournaments. The team may have lost two seniors, but they got an influx of talent from the freshmen class. “We faced a tough Calhoun team in the playoffs last year, but we can probably compete for state with the help of freshmen Sidney and Grace Funston,” said star player and junior Avi Arora.

The Funston twins quickly acclimated to the varsity atmosphere and already share goals with the upperclassmen. “I didn’t know what it would be like to have an effect on the outcome of the match for the entire team,” said Grace Funston. “There’s definitely pressure involved, but the team tennis experience is different and fulfilling.” Her sister Sidney plays No. 2 singles and has high hopes for the season. “I want to do well in the region tournament and make it to the state finals like the juniors did when they were freshmen.”

The boys team also has two aspirational freshmen contributors. The representation from all four grades contributes to cohesion and unity for the team. “I never thought the upperclassmen would be as welcoming as they are,” said freshman Jordy Elster. Misconceptions about varsity tennis permeate the incoming freshmen every year. “I didn’t exactly think freshman duties would be a thing,” said freshman Matt Genser.

Though these two freshmen have only spent six weeks with the team, they share the same aspirations as everyone on the boys and girls varsity tennis teams. “The goal is to win the state championship,” agreed both Elster and Genser. “No matter what it takes,” added Genser.