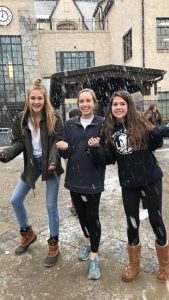 Hurricane Irma, the College Football Championship, icy roads and cold winter weather have all caused days off from school this year. Students cheer when they receive the long-anticipated text message poems signaling the cancellation of school and another day of relaxation. However, while missing multiple days of school early in the year may seem exciting, it leads to consequences.

After the recent snow days in late January, Pace needed a way to make up for five and a half lost days of learning: five full days of school were cancelled and the school closed early on Dec. 8 due to snow that began in the late morning and rapidly accumulated. Some possibilities included adding days onto the end of the school year, extending the school day and taking away some days off that were scheduled for holidays. In the end, the school administration decided to eliminate the Presidents Day holiday by having school on Monday, Feb. 19.

This decision brought dismay to many students who had trips scheduled that had been planned months in advance. Presidents Day weekend is an especially popular time for students to visit colleges. “I had a college trip planned for a while where I would miss only Tuesday, Feb. 20, but now I have to miss another day of school due to us having classes on Monday,” said senior Melanie Crawford. “It’s a big inconvenience.” Pace has its own college trip to many North and South Carolina schools during this time which continued as originally scheduled.

Atlanta Public Schools chose to add 30 minutes to every school day from Jan. 29 to Mar. 30. These schools have lost seven days of classes and released a survey that provided six options for ways to make up the significant loss of learning time. Now, the school days at these high schools will end at 4 p.m. “I think that what Pace did is right,” said senior Ben Bernstein. “Adding thirty minutes onto every day would affect us and the teachers for two months, but adding another day of school is a quick fix.” Unlike Pace, the Atlanta Public Schools have a certain number of hours of school that they are mandated to provide.

Many teachers were bothered by having so many days of school cancelled, especially those who teach AP courses and who need to cover a certain amount of material before the exams in May. “It frustrates me, but my students know to stick to the syllabus,” said AP English Language teacher Erica Barbakow. For Head of Upper School Michael Gannon, who teaches AP U.S. History, it is “very concerning. My class was originally right on schedule but now we are behind and are currently being forced to play catch-up,” he said.

The committee that finalized this decision included Head of School Fred Assaf and Mr. Gannon, as well as other administrative faculty members. After missing so many days of school, they knew they had to find a quick solution to the problem. “We didn’t want to mess with Spring Break due to all of the ICGL trips that occur,” said Mr. Gannon. “We have done this before because of snow days and thought that holding school on Presidents Day was the best solution.”