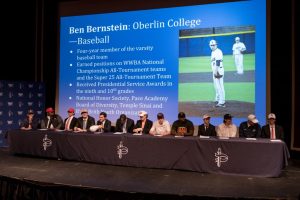 On Feb. 7, 13 senior athletes participated in National Signing Day and officially committed to Division I, II and III colleges. Now they will continue their sports beyond the high school level and take part in larger-scale athletic competitions.

While uncommitted athletes will have another chance to sign in the spring, the early signing day was convenient for students who had already verbally declared where they would be attending college. The athletes signed to attend colleges in nine different states, as far west as California and north as New Hampshire, for a total of eight different sports.

“It was rewarding to see all the hard work that all of the athletes have put in over the years pay off,” said Roos about his experience on signing day. “All of the support from the friends and family that attended the ceremony was amazing.” Roos has played varsity baseball for four years and serves as this year’s team captain.

“[Signing] was a great experience that I’ve been looking forward to,” said Kelly. “I’m excited for the next chapter of my life at Yale.” Kelly has scored over 1,000 points in his basketball career and helped lead the varsity basketball team to their state championship titles in both 2016 and 2017. Kelly has also contributed to the community with his ceramic and other art pieces, earning the Scholastic Art Award twice.

Salyer will join the UGA football team as one of the top 10 players in the nation, and as the number one offensive guard in the nation. He has racked up numerous awards for his outstanding football performance. A few of his achievements include his participation in the U.S. Army All-American Bowl, being named an Under Armour Future 50 MVP and being chosen a finalist for the USA Today Lineman of the Year award. “I’m most excited about getting the chance to play in front of my family and friends on a national stage, competing against the best the country has to offer every Saturday and every day, even,” he said.