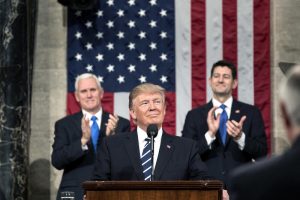 On Jan. 30, President Donald Trump delivered his first State of the Union address. This address to the joint members of Congress gave President Trump an opportunity to highlight the successes of his first year as president as well as lay out his priorities for the future. With the third longest run-time in American history at 1 hour and 27 minutes, Mr. Trump addressed several issues, but focused most of his time on the economy, foreign policy and immigration.

President Trump reported that during his tenure in office, large strides were made to strengthen the economy, including the passing of a $1.5 trillion tax cut (the biggest in American history), the creation of over 2.4 million new jobs and the fact that the stock market gained $8 trillion in value. According to The Washington Post, the tax cut is actually “only the eighth-largest – and is even smaller than two of Barack Obama’s tax cuts.” Also according to The Washington Post, the actual number of job created since President Trump took the oath of office is 1.8 million.

In his first year as President, Donald Trump was pleased to announce that he has eliminated more regulations than any other president in history. In his call for American unity, President trump announced that this nation will have a “new American moment” under his administration.

Along with highlighting his successes, Mr. Trump also used his speech as an opportunity to reveal his plans for the future. The President has made it his top priority to help U.S. veterans by giving them a choice in their healthcare plan, and to that end, he signed the landmark VA accountability bill in June allowing for the firing of problem employees working for the Department of Veterans Affairs. Mr. Trump also called for the Food and Drug Association (FDA) to start approving more experimental drugs and reducing the price of prescription drugs.

Regarding immigration, the Commander in Chief announced a four pillar plan to fix the loopholes allowing illegal aliens to enter the country. His first pillar is to give the Dreamers a path to full citizenship, and secondly to fully secure the Mexican border. His remaining pillars are to reform the visa lottery and to end chain migration.

President Trump focused very little on international policy, specifically in regards to the current tensions with North Korea. However, he did mention that his administration would focus on building up the nation’s nuclear arsenal.