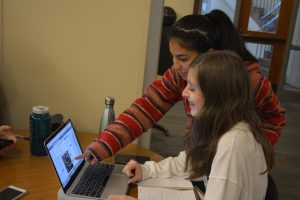 (Front to back) Juniors Lily Wagoner and Veronica Sandoval look at one of Lily’s handmade bracelets on her “TWIST By W” Facebook page. Photo: Jill Rawls

This month marks the 14th year since Facebook was launched by a group of co-founders, including current CEO Mark Zuckerberg. Since its launch in 2004, Facebook has grown into the most widely-used social networking site with over two billion monthly active users, according to the World Economic Forum.

Facebook allows users to upload photos, videos and updates to their profile for their Facebook “friends” to see and add likes or comments. “I like adding pictures to different photo albums so when I look back at them they will be very organized and compiled together properly,” said junior Sophia Lochan. “However, I mainly use Facebook to keep in touch with my friends from California. It’s nice that I am still able to see how they are doing even though I moved away.”

Junior Lily Wagoner, along with her sister, eighth-grader Norah Wagoner, also use Facebook regularly to advertise their jewelry business, TWIST By W. “It’s a great way to grow the business to a variety of different people,” said Lily Wagoner. “There are different tools we can use to get the word out about events and things like that.”

Facebook also offers a number of groups for users to be a part of, ranging from groups of seniors all planning on attending the same college to groups of people living near each other and buying and selling items with one another. One group many Pace students are involved in is Buckhead Exchange Teen. This is a closed group with more than 12,000 members, designed for people living in Atlanta to sell and buy primarily clothes, shoes and jewelry, along with a wide range of other items. “I use Buckhead Exchange because it is so easy to buy and sell items without leaving your house,” said junior Veronica Sandoval. “It gives me the opportunity to browse for designer clothes at really cheap prices that I can later resell.”

Along with Facebook’s enormous success, however, comes many challenges. In 2004, twins Tyler and Cameron Winklevoss sued Mr. Zuckerberg, claiming the idea behind Facebook was their own. They lost the lawsuit, but still received $65 million in a settlement. Today, the twins are billionaires after investing $11 million in Bitcoin.

Facebook, along with many other sites, played a role in the spread of fake news during the presidential election. Facebook was questioned by Congress about their role in the circulation of false information. As of December 2017, Facebook updated their system of identifying misinformation, from a red flag icon, to listing a series of other articles to identify the false parts of articles containing fake news.

Mr. Zuckerberg does admit that the problem isn’t yet solved: “Our goal is to connect people with the stories they find most meaningful, and we know people want accurate information,” he said in a status update in late 2016. “We’ve been working on this problem for a long time and we take this responsibility seriously. We’ve made significant progress, but there is more work to be done.”

Another challenge that Facebook faces is the dwindling numbers of young users. Teens and tweens have turned to social networking sites Instagram and Snapchat, spending significantly more time using those sites than they spend on Facebook. The usage for monthly Facebook members between ages 12 and 17 fell by 1.2%  in 2016, according to eMarketer. eMarketer predicted this rate of decline would grow to 3.4% by the end of 2017. While Instagram, which Facebook owns, doesn’t present a threat, eMarketer predicted that Snapchat would attract more teen users than both Instagram and Facebook before 2017 came to a close.

In the meantime, Facebook has recently adopted a new algorithm to control what posts users see, in attempt to give users a more interesting and relevant experience on the site. The algorithm is designed to put posts from friends and family members at the top of users’ news feeds, while scaling back posts from publishers and businesses. According to The New York Times, Facebook executives believe that filling users’ feeds with posts they want to interact with will decrease the mindless scrolling and reading that was proven in a psychology experiment to diminish student users’ sense of well-being.

The Facebook team is aware that the new algorithm will cause users to spend less time on Facebook, and be less engaged in some ways. “But I also expect the time you do spend on Facebook will be more valuable,” said Mr. Zuckerberg in a Facebook post on Jan. 11.