Where Does the NFL Go From Here? 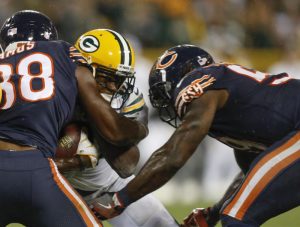 As millions of football fans across the globe gear up for the Super Bowl, the future of the NFL seems more and more unsure. Growing concerns about Chronic Traumatic Encephalopathy (CTE), as well as a rift between NFL commissioner Roger Goodell and team owners, have created uncertainty about the direction of the most popular American professional sport. Plummeting ratings and continued protest of the national anthem by players also have not helped.

The greatest concern that looms over the future of the NFL is safety concerns tied to CTE. According to Boston University, CTE is a progressive degeneration of the brain caused by repeated brain trauma. A study conducted by Dr. Ann McKee, director of the CTE Center at the university, was published in The Journal of the American Medical Association in July. For the study, Dr. McKee examined the brains of 202 deceased football players. Of those players, 111 played in the NFL, and 110 of those players were found to have CTE.

Current players are aware of the risk involved and decide to play through it, but early retirements due to fear of injury are becoming increasingly more common. Former NFL stars Calvin Johnson and D’Brickashaw Ferguson both called it quits in their early 30’s, surprisingly young for two of the best players at their respective positions. In addition, concerns about long-term health effects have led to fewer kids playing youth football.

But the future is not all doom and gloom. Efforts are being made to make the game safer, such as improved helmet technology and rules changes that penalize players for helmet-to-helmet and dangerous hits. While some players argue about the NFL becoming “soft,” these precautions are necessary in order to protect the players.

Another factor contributing to worry amongst NFL fans is the leadership of commissioner Roger Goodell. Even though he’s disliked by a large number of fans, players and some owners (namely Jerry Jones), Goodell inked a five-year contract extension worth about $200 million. Jones protested the lack of involvement pertaining to Goodell’s contract, and delayed contract discussions for weeks until an agreement was finally met. This fissure between owners and Goodell may create worry for the next few years, with NFL Players’ Association president and Cincinnati Bengals offensive tackle Eric Winston already saying that a lockout in 2021 is “inevitable.”

This past NFL season saw a decline in ratings by 15% from 2015, which equals 2.8 million viewers according to Nielsen Holdings PLC. A combination of the aforementioned problems have contributed to this severe dip in ratings. Some fans have boycotted the NFL, as they are unable to watch men destroy their brains by repeatedly crashing into one another. Others have boycotted because they’re unhappy about players kneeling for the anthem.

Others simply do not care anymore, due to both oversaturation and dull matchups. NFL games are now on TV four days of the week (Sunday, Monday, Thursday, and Saturday in December), and it is simply too much football for the average fan. Sunday morning London games have not been the answer either, with some games only available online.

While the NFL seems clouded in doubt at the moment, it has survived for over 50 years and will surely find solutions that can please fans and players alike.