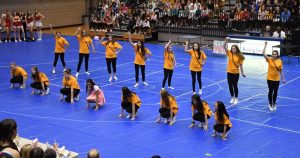 Freshmen girls get their time in the spotlight during the “Phineas and Ferb” dance. Photo: Fred Assaf 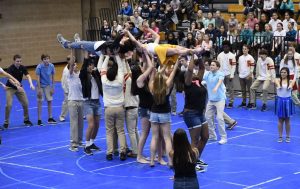 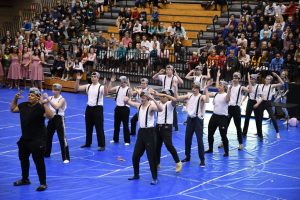 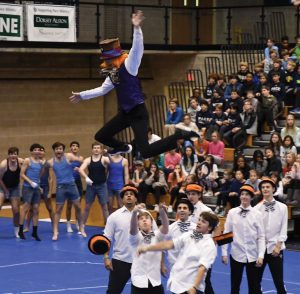 The Class of 2021 chose an animated show to begin their upper school Spirit Week careers with the Disney Channel series “Phineas and Ferb,” following in the footsteps of “The Incredibles” and “Fairly Odd Parents.” Covering the gardens with orange and blue streamers, as well as using chalk drawings across the courtyard, this class had some of the better freshman decorations in recent memory.

While the final product may not have been the most fine-tuned, the freshmen showed great promise for the years to come. Their dance did not come without its obstacles, however, as the quality and volume of the soundtrack was not the best. The freshmen did their best to overcome this handicap through a battle between the titular characters, as well as solo dances by the freshmen playing the characters Candace, Isabella, Perry and Dr. Doofenshmirtz. The costumes were reminiscent of past freshmen dances, simple yet effective.

The Class of 2021 was able to utilize its budget effectively, despite having the smallest amount of money to work with. While the freshmen are never expected to excel in any particular category, this class did the best with the hand they were dealt and will look to improve in the future.

The sophomores took a big step forward this year, with the 1978 classic “Grease.” Taking the Academy on a tour through Rydell High, they turned the cafeteria into a 1950’s diner, complete with menus and decorations throughout the area. The dance was a great blend of new bangers as well as iconic hits off of the “Grease” soundtrack, and even included the famous hand jive from the National Bandstand scene. The Class of 2020 improved its timing in order to stay on beat and had strong performances by its leads. This year’s dance incorporated more advanced moves, including multiple well-timed back flips. The T-Birds and Pink Ladies took turns on center stage, as well as the Rydell cheerleaders and athletes, along with other students.

The Class of 2020 won this year’s Most Improved Grade, and set a firm foundation to build on in their final two years. A bar has been set; now they must find a way to raise it next year.

Continuing the trend of previous years, the Class of 2019 wowed the crowd with a real life interpretation of the beloved board game, “Monopoly.” Hanging up “Pass Go” signs on the wall of the Inman Center, hanging money on the ceilings, and leaving rolling die on the table, the juniors transformed the Inman Center into a real life game of “Monopoly.” The morning video focused more on the roasts instead of a solid plot line, which therefore gave the seniors an easy win in that category.

Not only did the Class of 2019 excel in their decorations, but once again the juniors proved their ability to choreograph an outstanding dance. Whether it was the police guards arresting the jailbirds, the train conductors showing their awesome dance moves, or the Monopoly man himself dressed in his dollar bill suit, the juniors showed their ability to follow the beat and stay in sync throughout the entire dance. For the second year in a row, the Class of 2019 earned their spot as second place in the upper school Spirit Week competition.

The Class of 2018 once again blew away the competition this year on and off the dance floor. The senior class introduced their theme of “Alice in Wonderland” by decorating the entire high school with streamers, couches and signs with famous quotes from the novel such as “Follow the white rabbit.” The seniors started the final day with their morning dance, which included a grand finale of tossing powder in various colors into the air. Following the dance, the seniors showed their hilarious video of “Alice in Cumberland.” The 10-minute long video followed the story of Alice, but instead of taking place in Wonderland, the story takes place in Cumberland Mall. The video was a big hit and led to a highly anticipated dance later that afternoon.

The seniors began their dance with a large spiral surrounding Alice as she was lifted up in the center. The dance included many characters from the novel and depicted each in interesting ways. Not only was the seniors’ dance exciting, some of the dance was improvised. According to senior Schuyler Drose (who played the Mad Hatter), the part where he was thrown into the air by seniors David Roos and Gavin Guest was completely spontaneous. Another exciting part of the dance was when Jaden Steagall as the White Rabbit showed his impressive dance moves, revving up the crowd. Showing great improvement from last year, the Class of 2018 was the clear winner of this year’s Spirit Week competition.

Categories
Life At The AcademyLifestyleSpirit Week