The Smiths Keep it Real 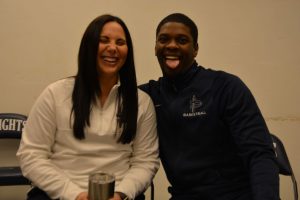 In anticipation of Valentine’s Day, many couples plan grand gestures weeks in advance to surprise their loved ones: elegant dinners, carriage rides or trips to the theater. But in the case of Ryann and Demetrius Smith, romance is in the details. When asked what their big plans were, both spouses replied “basketball.” Basketball, of course, meaning a romantic night spent in Pace Academy’s Inman Center as Coach Smith leads the varsity boys team. Although the night will be a bit unremarkable, the two seem content with their choices. Valentine’s Day is not a major holiday in their family.

Nevertheless, Coach Smith never misses an opportunity to surprise his wife, even though the two agree each year not to exchange presents. On Valentine’s Day, it is not unusual for Mrs. Smith to walk into her fourth floor classroom and be greeted by a flower bouquet or balloons. Small gestures like gifts and other surprises are characteristic of the couple no matter what day of the year it is. Details such as short texts throughout the school day or impromptu lunch dates maintain the positive energy between the two. The secret to their happy marriage? Focus on your spouse and communicate.

Communication, however, has never been a problem for Mr. and Mrs. Smith. In 2007, they met through mutual friends at a party. Neither were expecting to fall in love that night, but over ten years, including four years of marriage later, the two laugh about their original meeting. Now with two young boys in tow and hectic schedules, both parents have little time for partying. Nevertheless, parenthood has certainly added a layer to their relationship. Mrs. Smith even said when asked about her favorite aspect of Coach Smith that she has loved watching him become a father. According to Mrs. Smith, he is kind, attentive and helpful.

For the Smiths, family is never too out of reach. Mrs. Smith works in the Academic Resource Center and Mr. Smith is in the athletic office. Pace is truly their home. Even though the couple rarely run into one another at school, there is a calming feeling knowing their spouse is nearby. In free moments outside of Pace, the family enjoys traveling. Mrs. Smith dreams of venturing to Bora Bora while Coach Smith reminisces on the couple’s vacation in Mexico.

But for now, it is basketball season, a fast paced, busy period in the Smiths’ schedule. Coach Smith is coaching the boys varsity team through another season and Mrs. Smith is his biggest fan. This Valentine’s Day, at the end of a long night of basketball, you can find the couple either grabbing a quick bite at a neighborhood restaurant or at home with their sons. They do not need Valentine’s Day to demonstrate their love. For the Smiths, romance is all in the details.

Categories
Life At The AcademyLifestyleValentine's Day