The ‘Covfefe’-in-Chief: The Case for Impeachment 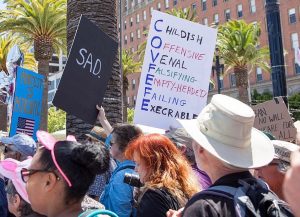 Additionally, Trump’s frequent, yet shocking, headlines have desensitized the American people. Even if you strongly dislike Barack Obama, could you fathom him doing even half of that? Putting Trump’s morals, or lack thereof, aside, the grounds for Trump’s impeachment, which includes advocating illegal violence, obstruction of justice, violation of the Emoluments Clause of the Constitution and endeavoring to direct law enforcement are rather sufficient.

Lucky for Trump, both chambers of Congress are controlled by his Republican party which means that he most likely has enough runway to remain President at least until the 2018 midterm elections. The major threat for Trump before the midterm election is the ongoing Russia investigation with Robert Mueller.

This impeachment deserves to receive bipartisan support, which would heal our ailing country. The widespread respect and trust of the president must be restored. Trump, who once claimed “no collusion” 16 times in a 30-minute interview with The New York Times, has lied repeatedly about the validity of the Russia investigation. Trump administration officials who haven’t already been fired have either been indicted or are on the chopping block.

Our nation is in need of a healthy two-party system, which will never happen if politicians stand by a sexist, racist, deceitful and divisive man, whose offense should transcend the political aisle. Fiscally speaking, I speculate that my views are centrist or slightly on the right side of the aisle. But how could I possibly support Trump-esque conservatives who feel that they can deny science, the free will of women and their liberty to make personal decisions, and the constitutional restrictions put in place by our founding fathers. It is time for “both sides” to come together. I implore you to engage in political dialogue – not arguments – with your peers. Political awareness is essential for the prevention of demagogues.