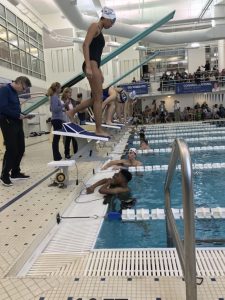 The Pace Academy varsity swimming and diving teams, led by head swimming coach John Ague and head diving coach Jim Ebert, kicked off the season on Nov. 15 with a victory against Loganville High School. Swimmers, alongside senior captains Melanie Crawford, Sophie Ferry and Catherine Sweeney, and junior captains Carter Frooman and Charlie Kaye, qualified for state in six events in the first meet alone. Ferry, along with sophomore Erin Hood, freshman Amalie Little and junior Luisa Whitney won the medley relay with a state-qualifying time. Kaye made three qualifying times and Hood made two of her own.

“The team has taken a little while to really show just how talented they are,” said Mr. Ague, who has coached the Pace swim team for 19 years. “Each year is very different as we look for new leaders to emerge – some by their results in the pool, some by what they can do as leaders in and out of the water.”

In a meet against Woodward on Jan. 11, Hood and Kaye both earned an Iron Knight award by qualifying for state in every event. “It is hard enough to make one time, let alone all individual times,” said Mr. Ague.

The success of the divers, both newcomers and veterans, has also been a big contribution to the team’s victories. “I like how laid back diving is, and coming from a background in gymnastics I was able to pick it up quickly,” said sophomore and first-year diver Hayden Sample. “My first competition was a little scary, especially because everyone is quiet in meets, which is very different from practice.” At a meet on Nov. 29, freshman Lizzy Kaye, a veteran diver, broke the Pace Academy record with her score for the six-dive event.

Pace hosted around 200 competitors in the last chance qualifier meet, coming from several schools including Mount Paran Christian School, Holy Innocents’ Episcopal School and The Lovett School on Jan. 19 and Jan. 20. This meet was the last opportunity for swimmers and divers to qualify to compete in the championship.

Divers competed Friday afternoon and sophomore Will Stratton earned first place for the six-dive event. Swimmers competed in the preliminaries on Saturday morning, and the top 16 swimmers for each event advanced to finals in the afternoon. Prior to this meet the male swimmers had not made any relay times to qualify for state, but in this meet, they qualified two of their relays.

“Both teams are very talented and we look forward to how they will perform at the GHSA State Swimming and Diving Championships,” said Mr. Ague. The championship meet will be held on Friday, Feb. 2 at Georgia Tech.