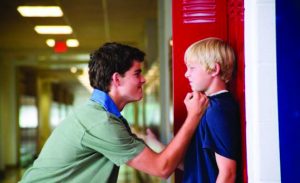 Bullying is an issue that is by no means new to high school students. It’s often portrayed in movies when the jock belittles the nerd or steals his lunch money. These days, society has become more concerned about bullying and has sought to combat it through school assemblies and closer monitoring of social media. However, a recent survey of Pace high school students conducted by The Knightly News indicated that out of 33 student responses (out of a possible response rate of 472 upper school students), 53% still feel or have felt like they have been bullied.

None of the respondents to the survey reported that they were bullied through physical abuse. But while many think of bullying as the physical intimidation of another, hateful language used to belittle someone can be equally as damaging. Some of this hateful language stems from jokes that have been taken too far.

Bullying can also take the form of a nickname imposed on someone that might seem funny to others, but is actually hurtful to the person.This kind of bullying is similar to the anonymous intimidation feasible through the use of the internet. “I think that the online version of it is far easier and more cowardly than the face-to-face bullying I saw 20 years ago,” said Head of Upper School Mike Gannon.

According to the survey, 24 Pace students of the 33 respondents have witnessed some form of bullying without stepping in to stop it. This happens even though Pace has held several assemblies and programs addressing the fact that being a bystander to bullying is equally as harmful as perpetrating the act.

The Pace Honor Council also plays a role in combating bullying. Dean of Students Gus Whyte spoke about the Honor Council’s ability to react to issues of bullying when students do step forward. “From the discipline side of things, we can only act on what comes across my desk,” said Mr. Whyte. “If a bullying situation comes to us we will take it to the Honor Council, but outside of that, I think we have to continue to talk to the students about the importance of treating each other with respect.”

A surprising 51% of the Pace students who reported having been bullied said they would not feel comfortable talking about it to a school counselor. As evidenced in social media and current news events, it can often be a difficult thing for a victim to speak up and let their voice be heard. “I think the students try to manage it themselves rather then get me involved,” said Mr. Gannon.

Despite this hindrance, Pace has taken a number of measures to combat bullying of all kinds. “The two biggest things I see Pace doing is, first, having the diversity and inclusion program,” said upper school counselor and AP Psychology teacher Amelia Tuttle. “We don’t realize that the words we choose can be offensive, and having this program helps students understand the power of their words. The other is the character education pieces, and having little tolerance for bullying.”

The survey results and interviews with students indicate that the atmosphere of Pace is, for the most part, positive. “I haven’t personally seen any bullying at Pace,” said junior Sam Assaf. “I think Pace is a safe community.” But while no one has been physically bullied, crude jokes and hurtful teasing can be heard in the hallways. While the intention of this language may be playful, many students do not realize the impact their words have on others.

Despite these lingering issues, school administrators like Mr. Whyte are optimistic. “Hopefully, we can work to change that culture and to make this a place where that does not happen,” he said.