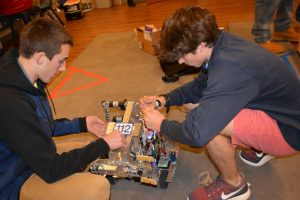 The voice of junior Blake Rodriguez echoes through the Fine Arts Center as he announces the latest RoboKnight news. The high school students listen, but many lack real understanding of the work Rodriguez does along with the other RoboKnights. Rodriguez, along with fellow veteran RoboKnights senior Ethan Much and junior Sophie Beck, work with six rookies, spending countless hours throughout the semester advancing their robotic skills. “This year, the returning members’ main job was to help teach the new students,” said Beck. “I had the privilege of watching them progress and learn new skills.”

Coached by computer science teacher Cristina Snyder and science teacher Brianna Korb, the team mainly participates in the FIRST Tech Challenge, a robotics competition that permits students to compete in diverse, head-to-head events. On Jan. 20, the team competed in the FTC Calvary-Etowah-Purple League Championship. At the end of the fall semester, the team was ranked second in their league and 11th overall going into the league championship. “Robotics game days can be pretty stressful, but they’re also exciting,” said Ms. Snyder. “Stressful because sometimes technology just glitches. Things happen for no reason. That can be really frustrating. But the day is also exciting because there’s time for on-the-fly improvement.”

The team did not advance to the elimination matches of the FTC Calvary-Etowah-Purple League Championship, which are the playoffs at the end of the day. “Our performance in the tournament does not adequately reflect the strong season we had,” said senior Eli Asher. “We accomplished so much this year and I loved being a part of the robotics team.”

According to Ms. Snyder, she along with Ms. Korb have high hopes for the future of the team. Along with the dream of being competitive enough to make it to the state playoffs and then move on to the South Super Regional competition, their main goal is to ultimately make it to the World Championship. However, the team isn’t just looking for awards. They also want to cultivate a new outlook towards robotics in an attempt to attract different types of participants.

“I hope that more girls will join the team,” said Ms. Snyder. “Robotics is absolutely an activity that anyone can do. There’s also more to the FIRST Tech Challenge than just robot prowess. We’re supposed to be working in the community, helping other teams and talking to engineers or other professionals, and being so focused on the bot, that can be hard to find time to do.”

The RoboKnights have already reached milestones for a promising future. This year was the first year that they created two complete robots and then merged them into the competition robot they used in the league championship.