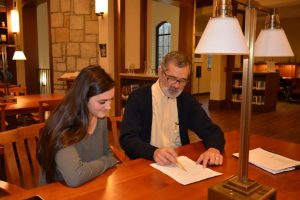 After 39 years at Pace, beloved English and creative writing teacher Ricks Carson will retire after this school year. The Pace community, Mr. Carson’s students and colleagues especially, will miss him, as he has touched the lives of many.

While he looks forward to retirement and a new daily routine, Mr. Carson will always love the many different aspects of being a teacher. “I am going to miss the exploratory nature of being with high school kids,” said Mr. Carson. When students connect with the material, and take it in a new direction, that’s when he feels the magic really happens. In addition, Mr. Carson will miss the comforting feeling of just being in the school environment. “There’s a really optimistic feeling that comes with that,” said Mr. Carson. Another one of his favorite parts of teaching is seeing students become writers who weren’t before. This could be through the form of all types of poems or short stories.

As for the future, he looks forward to learning about new topics that he hasn’t had time to explore. “[Georgia State] has courses on the universe, and I’m very interested in that even though I’m not a physicist,” said Mr. Carson. He also hopes to take a course on African American studies at Georgia State, where he will participate in non-degree classes. In addition, he plans to do a lot of reading. “I have a stack of books, probably 20 books tall, that I don’t have time to get to now,” he said.

Many students over the years have enjoyed the creative way Mr. Carson conducts his classes. One of his current students, sophomore Erin Hood, noted how much she enjoys the way Mr. Carson teaches students to interact with the material. “When we were reading “The Tempest,” we made all of these wind noises and banged on the table to simulate the storm,” said Hood. She also loved the time that the class went outside and collected leaves to represent the changing of the seasons in a poem they were discussing.

Mr. Carson has played a large role in the Pace community over the years. He was the varsity boys soccer coach for 10 years and the JV coach for 12 years. Currently, he is a faculty advisor for Knight Gallery, Pace’s literary magazine featuring student work. Mr. Carson is an accomplished poet himself, having been published numerous times. His poem “In the City of God” was nominated for a Pushcart Prize in 2004.

English Department Chair Marsha Durlin has been working with Mr. Carson since he arrived at Pace and will miss having him as a colleague. “I will miss talking to him about ideas that he has for his classes and his approach when we’re both teaching the same poem or book,” said Mrs. Durlin. She admires his careful planning of each day, every activity and how he is always coming up with new ideas. She knows he has many plans for retirement. “I am confident he is never going to be bored,” said Mrs. Durlin.