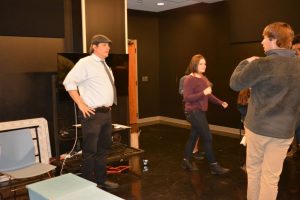 Around Pace, Sean Bryan is known to most as the cheerful and enthusiastic theatre director and drama teacher. But his love for the theatre goes much deeper than what meets the eye. “My junior year of high school, there was an opportunity to audition for the musical and I had the night free, so I gave it a try and I fell in love with it,” said Mr. Bryan. “My passion and career took off from there.”

Although Mr. Bryan enjoys teaching and directing shows at Pace, he is motivated to continue his acting career. “I am pursuing the local theatre scene so that I can make connections and bring some talent in to do workshops at Pace,” he said. Mr. Bryan will once again take the stage in the upcoming musical “Buddy – The Buddy Holly Story,” at the Georgia Ensemble Theatre. “A buddy of mine told the director that they should take a look at me, and so they contacted me to audition, and I drove up, read some lines and got the job,” said Mr. Bryan. He will be playing Buddy Holly’s manager in Act I and the New York agent in Act II.

The production centers on the protagonist, Charles “Buddy” Holly, who was born on Sept. 7, 1936 in Lubbock, Texas. The singer-songwriter experienced a meteoric rise to fame at a young age, with hit songs such as “That’ll Be the Day” and “Peggy Sue.” He performed from 1952-1959, opening for music greats such as Elvis Presley and Bill Haley & His Comets, and going on to sign with Decca Records and touring the U.S. and internationally. His life was cut short when he was killed in a plane crash on Feb. 3, 1959 at the age of 22. That date has been referred to as “The Day the Music Died,” and he was memorialized in the 1971 song “American Pie” by singer-songwriter Don McLean.

Despite his short career, Buddy Holly was viewed as legendary and was an early inductee into the Rock and Roll Hall of Fame. “Buddy – The Buddy Holly Story” is a musical that features Buddy Holly’s most iconic songs. Opening in London’s West End at the Victoria Palace Theatre in 1989, it has been performed for over 28 years in theaters around the world, including on Broadway.

Georgia Ensemble Theatre has already performed this musical once before, and, because of its success, will be performing it once again. This time, however, it will be a bit more special. “The artistic director of Georgia Ensemble [Robert Farley] passed away, and this was going to be his last show before he retired, so in that way it will be a homage to him,” said Mr. Bryan.

“Buddy – The Buddy Holly Story” will be performed April 12- 29 at Georgia Ensemble. For more information on the show and how to get tickets, visit http://get.org/.