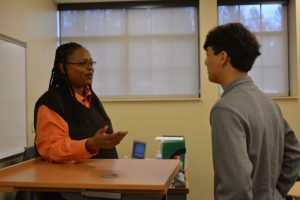 Ms. Jordan encourages her current debate student, junior Kirk Spinelli, to sign up for her new elective for next year. Photo: Abby Meyerowitz

To extend the opportunities offered at Pace, the curriculum committee has approved two new history electives for next school year. J.B. Fuqua Chair of Speech and Debate Shuntá Jordan will offer a course called African American Saga: From Plantations to the Presidency and history teacher Caitlin Terry will offer a course called Propaganda: from Revolutions to Retweets.

Offered both semesters to juniors and seniors, Ms. Jordan’s African American history elective will inspire prospective students to dive deeper into the studies of African presence in America, especially the South. Ms. Jordan, having been born and raised in Southern culture, has always been intrigued by the history of her ancestors. “I have grown more curious about how the events of the past brought us into the present,” said Ms. Jordan. “So when thinking about this course, I wanted to offer an understanding of the African American past as a teaching tool for better cultural understanding and hopefully a better future for all of us.”

Ms. Jordan is also interested in the extensive impact that people of African descent had on this world. She will encourage her future students to learn about and confront race in a much more meaningful way. Ms. Jordan hopes that her students will gain a fundamental understanding of and appreciation for the history, legacy and continuing contributions of people of African descent.

Some of the hot topics of the course include deeper studies into African civilizations, the slave trade, the Civil Rights and Black Power eras as well as the rise of President Obama. “Many Americans, including myself, have been unaware how African-descended people affected the ancient world and pushed modernity forward,” said Ms. Jordan. “Therefore, it is important to acknowledge how the ideas of the African-descended people have affected politics on the world stage in late modernity.”

Also offered this coming fall, Ms. Terry’s course, Propaganda: from Revolutions to Retweets, will focus on propaganda through three narratives: revolution, nationalism and world wars. The class will dive deep into the studies of the French and Haitian revolutions, German unification, the Dreyfus affair, World War I and World War II. “My background as a historian is particularly in the visual culture of the French Revolution and I’m interested in the power of images (be it a painting, print, poster, photo or film) and how they are created and deployed for an audience.”

Inspired by a British Library exhibit called “Propaganda: Power and Persuasion” in 2013, Ms. Terry has thought about creating a course like this for a while. “I want the opportunity to teach the Class of 2019 again, and to teach a college-style seminar history class,” said Ms. Terry. “My aim is for students to define the term “propaganda,” learn how to visually read an image, hone their critical thinking and analysis skills, and be prepared for small group discussions that typically occur in college humanities classes.”

Ms. Terry also wants to emphasize the significance of the visual images around us and how they impact our lives. “In our age of constant exposure to and consumption of media, I think it is imperative that citizens are naturally critical of visual culture and what their authorities tell them,” said Ms. Terry. “While ‘propaganda’ does not have any single definition, its influence (both direct and indirect) shapes individual and collective constructions of identities and politics.”