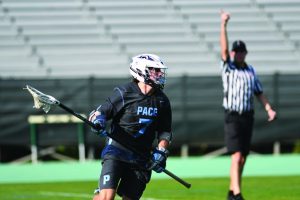 While the inclement weather still threatens, making it feel like the dead of winter, spring sports teams are in high gear, particularly the mens lacrosse team. The team has had an impressive preseason and aims to continue playing competitively. The team struggled in a challenging fall league and ended that season with a record of 1-7, but transitioned well to a winter box league.

The Knights were much more successful in their winter season, ending with a 4-2 record. These relaxed off season games have allowed the team to become a unified group in preparation for the official season. The team was particularly cohesive due to the increased attendance by team members from every grade that participate in the off season games as well as off season workouts and throw arounds. “The fall and box teams helped us bond as a team because we had no coaches,” said senior Joseph Mathias. “We had to organize everything ourselves, and hanging out helped build team chemistry.”

A strong but small group of seniors led offensive production last season. Major losses to the team include attack-men Drew Simons ’17 and Josh Simons ’17 and key ground ball midfielder Sammy Tanenblatt ’17. In addition, offensive midfielder Jack Neill, a junior and former captain, left Pace at the end of first semester this year. With these losses, the team has looked to new members to add to the program and take on bigger roles.

Head Coach Grady Stevens named senior Joseph Adams and junior Sam Assaf team captains this year, and he will likely name one more captain with the departure of Neill. The new captains have been enthusiastic and engaged with the team throughout the fall and winter season. “The captains have done a great job organizing the team early on so we will operate smoothly by the start of the season,” said junior Brogan Smith.

In addition, underclassmen, including freshman Tripp Trimble and sophomore Thomas Siegenthaler, will be essential to the future of the team. “I feel good about this year’s freshmen and sophomores and I’m excited for the depth they will bring to the team as well as the development that this freshmen class will have as a whole,” said Assaf. A new group of freshmen, along with sophomores like Aidan Gannon and Ben Ginsberg stepping up their game, will increase the scope of the team for this season.

There will also be new additions to the coaching staff this year, including upper school science teacher Matthew Smentek, as well as players from the professional box lacrosse team, the Georgia Swarm. The Knights have a packed season and will kick it off with a scrimmage at North Paulding High School on Feb. 8. The first home game is against Mt. Pisgah on Feb. 16.