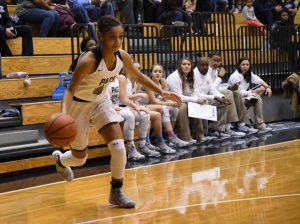 With an overall record of 13-6 and a regional record of 9-2 as of Jan. 28, the varsity girls basketball team is currently ranked second in Region 5-AAA. Beating neighborhood rival Westminster twice this season, 45-16 and 41-31, their only two regional losses as of press time have been to the Lovett Lions, who are undefeated in region play and ranked No. 9 in Class AAA, according to MaxPreps.

With the absence of any seniors on the team this year, the juniors have stepped up to lead the team. “This year’s team has a much younger dynamic,” said junior Ann Rafeedie. “We get along really well because we are all so close in age.”

As the leaders of the program, juniors Paige Fleming, Madeline Janki, Kayla Ross and Joelle Zelony, along with Rafeedie, hope to guide the team to eventually win the region tournament. “Our biggest goal this season is to be at the top of our region,” said Ross. “But we also hope to continue building the basketball program and setting the tone for the years to come.”

The juniors have worked extremely hard to develop the team after the loss of last year’s seniors. “We are coping with the loss of some great girls but we seem to be doing pretty well,” said Zelony. Head Coach Troy Baker is excited and enthusiastic about the season, and is pleased with the new team members. “The energy is positive, and the returning players have done a great job welcoming the newcomers to the squad,” said Coach Baker.

The team has progressed greatly since last year. The improvement can be credited to the team’s ability to finish their games strong. “Our biggest improvement is our ability to make sound decisions in the fourth quarter, which has been instrumental in our ability to close out close games,” said Coach Baker. “Our margin of victory has been six points or less in most of our wins this season, which is a strong indicator that we are buckling down in crunch time.”

Over winter break, instead of skiing or tanning like much of the student body, the girls basketball team played in the Hart County Tournament. The girls left with two wins and one loss, placing them in third overall. As well as gaining more practice and improving their fundamental skills, the team also formed a strong bond that added to their overall chemistry. “The tournament really brought us all together,” said Janki. “We are now a much closer team and it is evident on and off the court.” With these strong connections, the team truly cares about each other and thus plays harder for each other. “Relationships are the foundation of this program,” said Coach Baker. “Every game is more important when you care about your teammates.”

Although the team has been pretty successful so far, their two region losses to Lovett have encouraged them to work even harder. “There are some improvements we still need to make,” said Rafeedie. “We really need to work on our defense and communicating on the court.” One of their most common mistakes is the number of turnovers recorded in games. “We need to work on controlling the ball and making sure we don’t turn the ball over,” said Ross.

The strong chemistry of the team has inspired others to try out for the team this year. Junior Devan Johnson saw the team dynamic and decided to give basketball a try. As the only junior on JV, Johnson’s leadership skills are truly put to the test. “All the freshmen were really welcoming,” said Johnson. “I was nervous being the only junior on JV, but it’s a lot of fun and I feel like we’re family already.”

The excitement before a big game is one of the main reasons these girls love the sport they play as much as they do. “The feeling of all the fans riling us up while we run out of the locker room to the pump-up music and start our warmups is truly exhilarating,” said Janki. “It’s one of the reasons I love the game so much.” This love of the game is what truly drives the program. “My hope is that by the end of the season, every player and every coach will be thinking the same thing: I don’t want this to end,” said Coach Baker. The regular season ends with a home game against Stone Mountain on Feb. 2 at 5:30 p.m.