Despite his Flaws, Trump Can Point to Some Successes 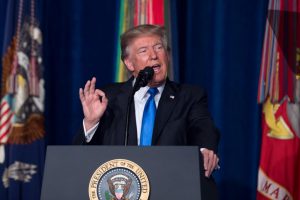 After a year of President Donald Trump in office, the U.S. has undergone significant changes. President Trump has gotten himself into some precarious battles that have made it hard for many Americans to take him seriously. Whether it be taking shots at media icon Lavar Ball, the National Football League, or CNN, Trump stays on offense, which likely points to his historically low approval rating of 39%. Most recently, President Trump has been under scrutiny because of the two-day government shutdown over the spending bill and DACA (Deferred Action for Childhood Arrival). Despite President Trump’s numerous flaws, his accomplishments in office should not be overlooked. President Trump has impacted America’s military, politics and economy extensively in his first year in office.

One of President Trump’s focuses on the campaign trail in 2016 was to eliminate ISIS and make improvements to the U.S. military. The Defense Department reported that 11 months into Trump’s presidency, there are an estimated 1,000 ISIS fighters and 5.3 million people have been freed, as compared to 35,000 ISIS fighters and 2.4 million people freed in the final 28 months of President Obama’s term. In July, the Iraqi government declared that Mosul had been liberated from ISIS and in October, American-backed forces drove ISIS fighters from their headquarters in Raqqa, Syria. President Trump and others in Washington credit many of the successes in the Middle East to Trump’s push for U.S. allies to pay more into NATO defense accounts and the deregulation of rules of engagement for the U.S. military.

Domestically, President Trump has made little progress on his campaign promise of a wall spanning the United States’ southern border. But Illegal border crossings have been down 60% from pre-Trump times, marking the lowest number of Southwest border apprehensions since 1971.

Likely the most enduring legacy of President Trump’s first year in office will be his political impact. After Supreme Court Justice Antonin Scalia passed away in February 2016, a big question revolving around the 2016 election was whether his successor would be chosen by a President Hillary Clinton or a President Trump. While campaigning, Trump promised to appoint a conservative to succeed Scalia and followed through on this promise as Neil Gorsuch assumed office as a Supreme Court justice in April 2017. Additionally, President Trump set a new record by confirming 20 federal judges in his first year.

However, President Trump and Republicans in the House and Senate failed to successfully repeal and replace the Affordable Care Act, also known as “ObamaCare.” This failure to repeal and replace caused Americans to wonder if President Trump would be able to pass any significant legislation. This question was answered in December when Congress passed a $1.5 trillion tax cut bill.

Despite not receiving a single Democratic vote, the House passed The Tax Cuts and Job Act with a vote of 224-201, giving President Trump and Republicans the legislative win that they needed heading into 2018. The bill reduces the corporate tax rate from 35% to 21% and people across all income levels will see a tax cut of some sort. Several business have given immediate bonuses and pay raises to employees due to the tax cut. AT&T awarded 200,000 employees with $1000 bonuses and Walt Disney Co. soon followed by awarding 125,00 U.S. employees with $1000 bonuses and plans to put $50 million into a fund that will help employees with tuition costs.

The unemployment rate continued its downward trajectory from the Obama years and is down to 4.1%, which is a 17-year low. Additionally, the GDP has increased to above 3%, the DOW Jones reached an all-time high, and 1.7 million new jobs have been created. Many of these economic successes have been attributed to President Trump’s deregulation. President Trump cut 17 regulations for each new one, which reduced regulation by almost 50% and saved $8.1 billion.

While it is almost certain that President Trump will continue to be impractical and at times aggravating in 2018, there is hope that he and his administration do their best to continue to protect and serve in the upcoming months.