Bitcoin and Cryptocurrency: The Future of Payment 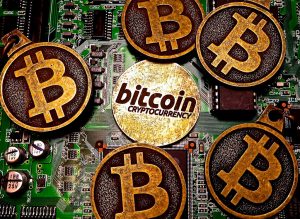 In the month of December, your social media feeds were probably filled with information about bitcoin due to an absurdly large 1000% price increase. The current value of one bitcoin is $13,419. At its core, a bitcoin is a series of digits where each number is assigned to a bitcoin. U.S. money works the same way since each dollar bill is labeled with a series of digits; however, U.S. bills actually have a face value. Bitcoin does not have a set face value since it is purely a digital currency that cannot be exchanged physically. All money goes through a bank and has a middleman in a transaction. Bitcoin goes directly from “Party A” to “Party B” with no one in the middle.

Bitcoin was not the first attempt made at cryptocurrency, but it was the first that became relevant. In 2008, the domain of bitcoin.org was anonymously opened. Later that year, there was a document called “Bitcoin: A Peer to Peer Electronic Cash System” created by an unknown person under the alias of Satoshi Nakamoto. The first bitcoin transaction was between Nakamoto and Hal Finney, a developer for the Pretty Good Privacy Corporation. Nakamoto mysteriously disappeared and handed the reigns of bitcoin to Gavin Andresen who created the Bitcoin Foundation in September of 2012. To this day, it’s not generally known who Satoshi Nakamoto is. Bitcoin began to grow exponentially in 2011 when Wikileaks began to accept the currency as donations.

So what is bitcoin even used for? Bitcoin is a currency like any other, but its anonymity allows for more private transactions, which explains why it is such a hit within the deep web. The deep web is the underground of the internet that can only be accessed through a virtual private network service called Tor. Within the deep web there are hundreds of marketplaces that can be used to make anonymous transactions. The deep web has a marketplace for illegal drugs, human trafficking and even assassination.

But bitcoin is not only used to buy products and services on the deep web. Anyone can buy physical products with bitcoin. Many huge companies accept bitcoin, like computer technology company Dell and even Expedia, a popular travel booking site. Overstock.com, one of the biggest online American retailers for surplus home goods, began accepting bitcoin in 2014 as well as Newegg, an online retail giant that specializes in computer hardware and software. It would not be surprising if many giant retailers picked up bitcoin as a form of payment in the near future.

Bitcoins certainly have value since there is a finite number of them. It is estimated that right now there are only around 21 million bitcoins. Some may call bitcoin a scam because other cryptocurrencies can be developed with their own set of numbers. Bitcoin’s flaw is that it is a number and that there are an infinite number of numbers, so any cryptocurrency can come into existence and cause bitcoin’s value to plummet.

Major companies like Microsoft are beginning to stop taking bitcoin due to its volatility and risk. Bitcoin at its core is a volatile currency since its value can change at any moment, and online vendors are beginning to develop a view that cryptocurrencies are unstable. Governments currencies like the U.S. dollar and the euro are stable because they are highly regulated and the public trusts these currencies. Will any cryptocurrencies be stable in the future? No one has an answer to that question at the moment. If a mega-cryptocurrency arises, then it could potentially overtake every currency in the world and every country could begin to use one currency. Cryptocurrencies have an exponential growth trend that continues to rise.