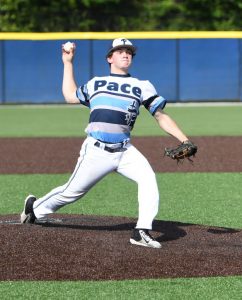 Junior Brian Zeldin, a U Penn commit, deals out a pitch in the first round of the State Playoffs against North Hall last year. Photo: Fred Assaf

These past few weeks have brought nothing but cold weather and even some snow. However, the weather doesn’t stop this team, despite playing outdoors. It’s already time to dust off cleats, bats and gloves, and “take me out to the ballgame,” because baseball season is underway.

Last season, the Knights seemed to be rolling. Crucial wins over both Lovett and Westminster solidified the Knights as the two seed heading into the state playoffs behind Redan. However, a first round loss to North Hall rocked the Knights, sending them home early. “The [North Hall] loss last year is not at all what we expected,” said senior captain David Roos. “We worked so hard throughout the season with the goal of playing for a state championship. We were all shocked after a first round loss.” North Hall went on to win the 3A state championship.

This year, the Knights look to fill the void left by the graduation of first baseman Justin Rayman and catcher Jack Rubenstein, two vital contributers to last year’s success. Despite these losses, Roos and the four other returning seniors, Ben Bernstein, Zeke Diamond, Ryan Mazur and Jaden Steagall, look to guide the team to success in the upcoming season. Bernstein, Diamond, Roos and Steagall have all committed to play baseball in college next year. “We have a core group of seniors on this team that are more than capable of leading this team,” said Bernstein. “We have all played for Pace since our freshman year and know what it takes to be a successful team come the state playoffs.”

The Knights also have a strong group of returning juniors, including Andrew Jenkins, Mitchell O’Berry and Brian Zeldin. Jenkins and Zeldin have played significant roles on the squad since their freshman season and look to extend their roles on the team this year. Jenkins and Zeldin, both of whom have already committed to play baseball in college, will be the top two pitchers for the team this year. Jenkins will also see time at catcher and third base, while Zeldin will see some time in the outfield if he is not on the mound.

New to Pace this year, junior Darian Howard will be called upon to take over Rayman’s role at first base. “Even though it’s early into the season, the brotherhood of the team is shocking,” said Howard. “Everyone on the team is so close, and I have had no problem fighting into my role on the team.”

The Knights have six college commits on this year’s team. Expectations for this year are high. The Knights know what it takes to be a successful team, but at the same time know what it feels like to end the season on a disappointing note, which keeps them humbled and hungry. “We are hoping to build off of last year’s success and continue to grow as a team,” said head community coach Seth LaFera. “I expect a lot of leadership out of this group of seniors when it comes to defense, pitching and hitting, but also when it comes to building the culture of baseball at Pace.”